Gilded Age paintings by Walter Gay are a rare treat at the Frick.

He had the confidence to depart from the facts in order to emphasize the harmony of these carefully decorated spaces. 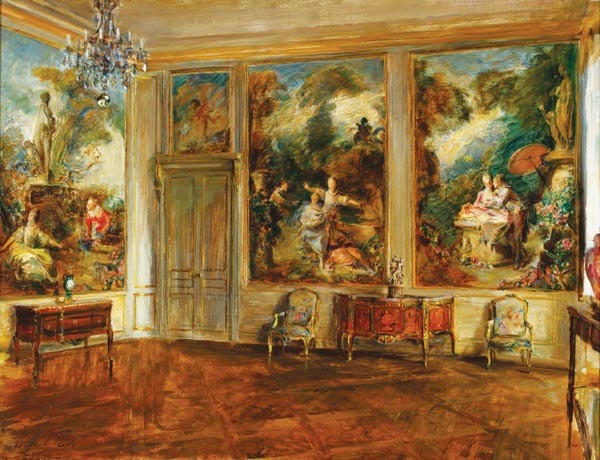 Impressions of Interiors: Gilded Age Paintings by Walter Gay is pure pleasure, grand in scope with 69 paintings, each executed with consummate skill and grace. The Frick Art & Historical Center, which organized the exhibit, has given it a full treatment with well-illustrated, informative catalogue and educational programs, capped by the Frick's visitor-friendly free admission. As Gay doesn't have the name recognition of contemporary John Singer Sargent, the exhibit is a sleeper, offering visual gratification, historical context and, for those so inclined, a bit of lifestyles-of-the-rich-and-famous (adjusted for inflation) billionaire envy.

Born in Massachusetts, Walter Gay (1856-1937) received academic art training in France, later marrying heiress Matilda Travers, who facilitated his entry into upper-level society. He and Matilda shared a passion for collecting and decorating their successive Paris apartments and French chateaux and, it seems, exerting some influence on the Eurocentric high-style taste of the times, including the Rococo revival. Gay even acted as a collections adviser to a number of American art museums.

Though Gay painted for sales as well as gifts, many of his works were commissioned. He was sought after in Europe as well as America for his ability to capture the spirit of the sumptuous interiors of late-19th- and early-20th-century patrons, who cherished their museum-quality art and furnishings. His paintings of these rooms channel pride of ownership as they commemorate the aesthetic predilections of the Gilded Age. Among those collectors and society figures who commissioned Gay to depict the interiors of their homes was Helen Clay Frick: Gay's three paintings in the Frick's collection — paintings of the family's New York residence, now the Frick Collection museum — provided the seed of this exhibition, guest-curated by Isabel Taube in consultation with the Frick's Sarah Hall.

Gay's interior scenes captured the spirit of chateaux, mansions and country estates. His paintings were prized for their ability to evoke an aristocratic past, including in the latter part of his career, when tastes were veering towards modernism. Gay's paintings bespeak wealth and stability but also vitality, as these are rooms that were designed to be used and that appear to be lived in. Most of the paintings are modest in size and scope, typically picturing a lavishly decorated room with a golden glow of daylight filtering in. There are French doors, often ajar, and carved mantels displaying collectibles, and the rooms are often seen from the casually angled perspective of one who happens to be present.

A typical painting by Gay contrasts the loose and the crisp, with washes of color built up to achieve luminosity, scumbled passages of sometimes startling color, and opaque daubs of highlight or edge that, as they say, pop. Essential to the success of his enterprise were Gay's artistic gifts and savvy: His works are often as harmonious as a Whistler nocturne, at times as nuanced in built-up color as a Monet, and in places as unexpected as a Matisse, even as the paintings remained essentially serene. That's not to imply that Gay was the equal of those artists and their innovations, but he learned their lessons and incorporated them with his painterly talents. Gay modified scenes to reflect his aesthetic preferences, and the exhibit includes reference photographs showing some of the rooms, allowing us to see his artistic liberties as well as his fundamental accuracy. He had the confidence to depart from the facts in order to emphasize the harmony of these carefully decorated spaces.

Upon his death in 1937, The New York Times declared him the "dean of American artists in Paris" and a memorial exhibition of his work was held at the Metropolitan Museum of Art. His art was something of a throwback even during much of the time that he was producing it, and his values appear to be unapologetically elitist — including the idea that exquisite taste is uplifting. But his works offer a glimpse of a refined and rarefied world, much like the right-next-door Clayton house museum, one of the homes of industrialist/robber baron Henry Clay Frick and family. As for context, the exhibit labels and catalogue dwell on biographies, subtleties of decorative arts, and the reception of these paintings in their own time. They touch lightly on their underpinnings in class and wealth, and leave it up to the viewer to ponder — or not — the problematics of sumptuousness.