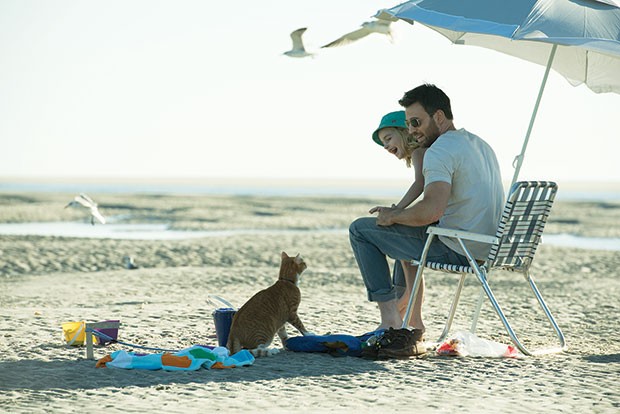 Fred, Mary and Frank enjoy a day at the beach.

What is the best long-term option — academically, socially — for a gifted child? That is the central question of the rather sunny melodrama Gifted — or at least until the film gets sidetracked with a custody battle.

After his sister died, Frank Adler (Chris Evans) took to raising her child, Mary (McKenna Grace), in a small coastal Florida town. He’s been home-schooling his niece (and her one-eyed cat, Fred) in a ramshackle little cottage; he also repairs boats, and a kindly neighbor (Octavia Spencer) helps with child care. But now it’s time to send 7-year-old Mary to public school to help her get socialized and lead a more typical “kid” life.

But her teacher (Jenny Slate) immediately sees that Mary is gifted, and suggests that the child attend a certain private school. Frank balks — he just wants her to be a regular kid, without the pressures of an academic hothouse.

Enter Frank’s mom, Evelyn (Lindsay Duncan), who jets down from Boston, in a designer suit and with a clipped British accent, to make a scene. It turns out the Adler family is full of math whizzes, and Evelyn wants her free-spirited granddaughter off the beach and on the brainiac track ASAP. And it goes without saying, frosty Evelyn also hates Fred the cat. So she sues for custody.

Gifted is directed by Marc Webb, who in 2009 made the indie charmer 500 Days of Summer, before moving onto The Amazing Spider-Man 1 and 2. So this by-the-book fare seems an odd choice. There’s a lot about this film that would place it squarely in the Nicholas Sparks sub-genre of melodrama: the small town on the Atlantic Ocean; sunset moments at the beach; a “funky” house; impossibly good-looking leading man playing some blue-collar role; juiced-up domestic conflict; a predictable resolution that pleases everybody; and a scene where characters dance to a 1970s pop song. Plus, the custody battle is pure TV movie, playing out with the high drama of surprise witnesses, gavel-banging and gotcha moments.

It’s hard to rate the actors gamely trudging through this predictable fare, though, as always, a couple of fine actresses (Slate, Spencer) are wasted in supporting roles. I couldn’t decide whether the Mary role, as written and portrayed with plenty of exuberance by Grace, was aiming to capture the unique nature of a precocious child, or just another of those typical overly cute “mini-adult” characterizations one often finds in Hollywood fare. It was too much for me, even to the point of grating, but I must give young Miss Grace her due: She delivers some excellent ugly crying.