Giant Eagle says they opted not to use cash “to limit any potential safety concerns,” but that they are “actively exploring the potential to introduce a cash option for the future,” Giant Eagle spokesperson Dick Roberts tells Pittsburgh City Paper in an emailed statement.

“In the immediate,” Roberts continued, “our solutions include working with partners like the YWCA Greater Pittsburgh in Homewood to enable the YWCA to exchange cash for Giant Eagle gift cards inside its building so the gift cards may be used on the Mobile Market. We are also exploring potential solutions involving general purpose reloadable gift cards, understanding that convenience charges related to this potential solution may create a barrier that warrants further investigation.”

“As a food retailer, we quickly identified food access as a key pillar of the social justice actions we needed to undertake,” Roberts says. “After learning from other retailers and food banks across the country who launched similar efforts, we began the process of bringing the Mobile Market to life in late 2020 and first introduced it to area communities in early January [2022].”

Local anti-hunger organization Just Harvest wrote in a 2013 report that Pittsburgh “has the highest percentage of people residing in areas where they don’t have ready access to supermarkets,” among similarly-sized cities. 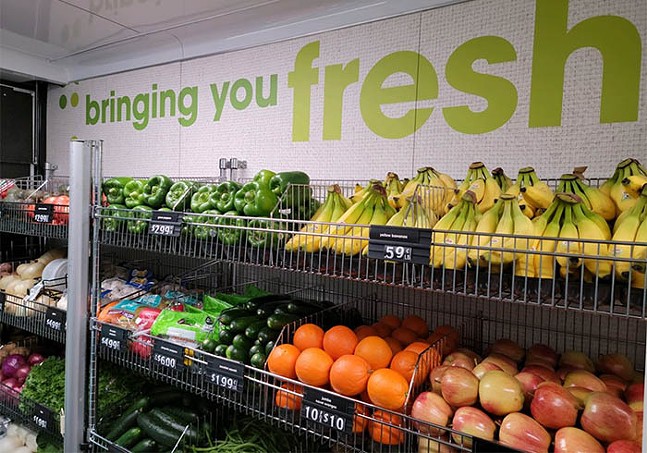 Because Giant Eagle says the Mobile Market “was born of our responsibility to stand up against racism,” they chose to bring the Mobile Market to “communities with notable Black populations,” says Roberts. The Mobile Market partners with community organizations in Larimer, Homewood, Braddock, Sheraden, and Rankin to spend three hours a week in each community.


"Our partnership with Giant Eagle has allowed us to become a conduit in providing access to fresh diary, meats, fruits, and vegetables to families in Sheraden and the West End,” says Orlana Darkins Drewery, Director of Communications at Jasmine Nyree Campus, Giant Eagle's community partner in Sheraden. “In addition to the Mobile Market, our partnership also provides residents an opportunity to shop for groceries and household necessities online and pick them up twice a week at the Campus. We are pleased that we are receiving positive feedback on how both the mobile market and the online grocery pick up service has made a difference in the community especially for individuals who do not have consistent or reliable transportation to access comprehensive grocery stores.”

The Mobile Market resembles a similar effort by the Greater Pittsburgh Community Food Bank, Green Grocer, which was discontinued in November 2021, partly in anticipation of the Mobile Market launch, a Food Bank spokesperson tells City Paper in an email.

The schedule for the Mobile Market is below: