Giant Eagle shares pregnancy-related purchase information with a broker selling data on people whose digital footprint suggests they might be pregnant, according to a new investigation by Gizmodo. Reproductive health and privacy advocates say the availability of this kind of consumer information poses a safety risk to people seeking abortions.

The investigation by data journalist Shoshana Wodinsky and reporter Kyle Barr into pregnancy-related consumer data for sale online identified 32 brokers nationwide “selling access to the unique mobile IDs from some 2.9 billion profiles of people pegged as ‘actively pregnant’ or ‘shopping for maternity products.’”

One of the businesses selling the mobile IDs of customers shopping for pregnancy tests is Quotient, the official data partner of the grocery store and pharmacy chain Giant Eagle. Gizmodo reports Quotient is selling “access to the iOS and Android devices of 9.6 million ‘pregnancy test kit’ and 960,000 ‘female contraceptive’ buyers.”

A unique mobile ID is a distinctive number associated with a smartphone or portable electronic device that makes it possible to track the movements of a specific device both on the internet and in real life. These mobile IDs are valuable to advertisers who use them to send you targeted ads, but data attached to mobile IDs can also provide access to sensitive information like people’s identities, locations, and, sometimes, whether they may be pregnant.

Although the data for sale are allegedly anonymized and aggregated, it’s been widely reported, including in peer-reviewed publications, that it’s not very hard to un-anonymize this kind of consumer data.

Pittsburgh City Paper’s review of Giant Eagle’s privacy policy confirms that the company collects information, like shopping histories, that could identify customers as potentially pregnant, that they share customer data with other companies, and that those companies can use those data for their own purposes.

Giant Eagle declined to discuss details about its partnership with Quotient, referring, City Paper to its privacy notice.

“At Giant Eagle, we take the protection of customer data seriously," a company representative wrote in an email response. "Through our partnership with Quotient, our guests are able to receive relevant savings opportunities and enhanced services.”

Giant Eagle’s privacy notice states the company collects "various types of information” about customers that use an online account or Giant Eagle Advantage Card or sign up for a Giant Eagle newsletter, contest, or sweepstakes. It also acknowledges collecting information “automatically when you visit our websites, use our mobile applications, or visit our physical stores.”

Giant Eagle says it shares customer data, including shopping history, “with a variety of service providers and third parties” to deliver better service to its customers, but those other entities are also allowed to use that data “for their own purposes,” according to the privacy notice.

Anyone with the money can buy this data from the online data marketplace LiveRamp, Wodinsky and Barr note, including law enforcement and anti-abortion vigilantes.

Sara Rose, deputy legal director of the ACLU of Pennsylvania, tells City Paper that businesses selling consumer data are always of concern, but that data on reproductive health purchases pose a specific set of privacy concerns.

“People might not care whether they sell information about how much milk or bread they buy, right? But once you start looking at things like contraception or pregnancy tests, I think people have an expectation that would not be sold to a third party, even though, if you look at their privacy policies, it's clear that they do,” Rose says.

Nevada and California, Rose says, have data privacy laws that allow individuals to opt-out of having their information shared with a third party, but Pennsylvania offers no such protections.

“As the line between our digital and physical selves fades, surveillance researchers and reproductive rights advocates increasingly see our data as the next big front in the war on abortion,” Mother Jones reported earlier this year, before the Dobbs decision. “Law enforcement has new tricks to land convictions for miscarriages or post-ban abortions; anti-abortion activists are making sophisticated updates to tried-and-true methods of stalking, harassment, and disinformation,” the Mother Jones story reads.

Even if companies choose not to share data relating to customer purchases of certain items with third parties, Rose notes that if retailers collect and retain that information, it’s subject to subpoena by law enforcement.

For consumers concerned about leaving digital footprints related to their reproductive health, Rose advises they use cash and not scan their Giant Eagle Advantage card or other customer loyalty cards.

Quotient has not yet responded to a request for comment. 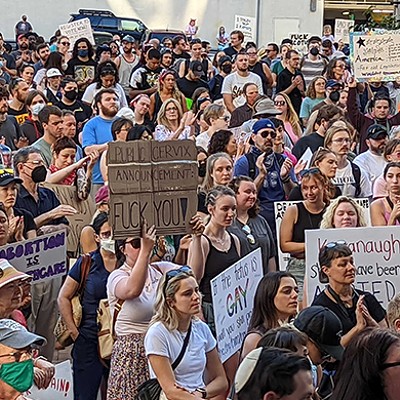