Ghosts at Off the Wall

The play is an exercise in gradually dismantling 19th-century mores

Like many Ibsen plays, Ghosts was controversial when it was first produced. After its London premiere, in 1891, The Daily Telegraph called it "an open drain: a loathsome sore unbandaged; a dirty act done publicly."

Ghosts brings Oswald Alving, an ailing son, home to Helene Alving, his newly widowed mother who has parented him from a distance for much of their lives. The specter of the deceased Alving husband and father haunts the family home in more ways than one, and the play becomes an exercise in gradually dismantling 19th-century mores as Ibsen incinerates orphanages (and the reputations of honorable men).

The play's offensiveness — the main root of which was found in its onstage discussion of syphilis — has mostly been left behind. But at Off the Wall, as directed by Simm Landres, Ghosts still manages to be an open sore of emotional unreserve.

This is largely due to the acting. Virginia Wall Gruenert is at the center as the matriarchal Helene. Helene is willful and decisive, but as the play unravels, so does her resolve. Fortunately, Gruenert oscillates between repression and effusion effectively as the walls burn down around her (some of them literally). 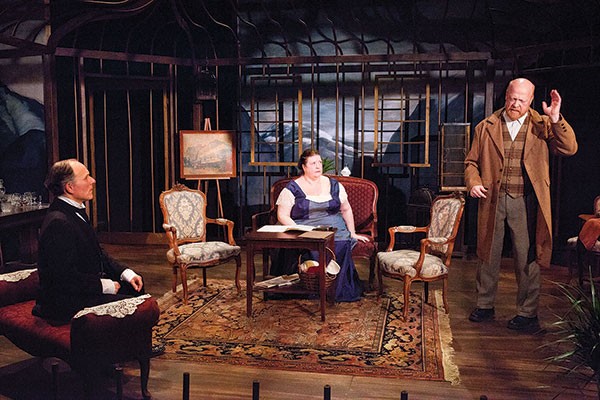 Photo by Heather Mull
From left: Ken Bolden, Virginia Wall Gruenert and Weston Blakesley in Ghosts at Off the Wall Productions

Other characters as written leave something to be desired. But this doesn't stop the actors. Sarah Silk particularly shines as Regina, a young maid who is subject to the whims of just about everyone around her. Silk takes the little agency Regina is granted and makes it resonate, exuding the hope, naiveté and skepticism of a life lived in subservience.

In its original Danish, "ghosts" is "gengangere," a word which signifies more than the empty apparitions of its counterpart in English. It refers to the return of someone who has left, not just in a physical or paranormal sense. It's about the legacy of the dead, even if it's one of depravity and neglect. While the loneliness of the play's title befits the bleakness of the production, at Off the Wall, Ghosts might not be the perfect word — here, it seems, the dead never left in the first place.