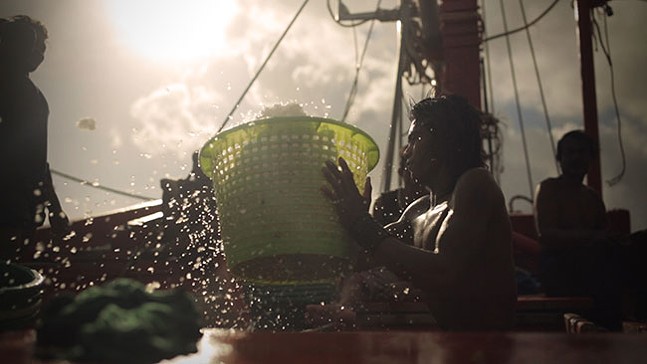 It’s easier to live in ignorance and think of slavery of something long past, a dark part of American history (with an eternal legacy). But the reality of slavery is that it takes many shapes, in many places, and is an ongoing horror. The documentary Ghost Fleet goes deep into the world of slave labor currently happening in Thailand’s fishing industry.

Overfishing has occurred for years, with ships venturing farther out to sea to capture more supply. This makes the job more grueling and positions more difficult to fill.

So, fishing companies started capturing men and teenagers, forcing them to work on the ships. Several survivors who speak in the film describe not seeing land or leaving the ship for years. They recall getting beaten with a stingray tail, being given meth to stay awake, losing limbs, and watching friends die in front of them. One former slave called the ships “where we lived without life.” They were worked to the bone for years, and those lucky enough to escape ended up stranded in a country other than their own.

Directors Shannon Service and Jeffrey Waldron follow a team of activists from the Labour Rights Promotion Network Foundation (LPN), led by Patima Tungpuchayakul, as they travel to remote Indonesian islands, looking for the escaped, stolen men. Patima is joined by Tun Lin, a labor rights activist and former slave, and Chutima “Oi” Sidasathian, a translator and journalist.

The heartbreak doesn't end with the stories of how these men were captured and held; it continues long after they escape. Patima meets several men living in Indonesian islands who long to return home to Thailand and see their families, who haven’t heard from them in a decade or more. But, often, they married and had kids and are now unable to leave. Sometimes they’ve forgotten their native language. The team takes videos of these men, promising to find their family back home and show it to them. In one of the few heartwarming scenes, Oi posts a photo of a man named Pong on the LPN Facebook page, asking if anyone knows his family. A few minutes later, they have Pong’s dad’s phone number.

While Ghost Fleet goes into great detail about some aspects of the fishing industry in Thailand, it leaves out others by focusing mostly on the men. Of course their stories deserve to be told, but the film would’ve been more thorough if it put the issue of fishing slave labor into a larger context. It’s not until the last five minutes that the film mentions the fish these captured men catch might be casually sold in American grocery stores. It’d be useful to have more information on what happens to fish after they’re caught and how people might avoid buying it. (Although the fishing companies obviously try to hide which fish were caught by slaves.)

Similarly, Ghost Fleet gives only a passing reference to the environmental effects of this kind of mass fishing (which is the reason the fishing companies had to send the ships out so far in the first place.) When we finally see a clip from one of the ships in action, it’s just an unfathomable amount of fish, and it’s untold what damage this does to the ocean.

Ghost Fleet is bleak, and doesn’t leave much reason for viewers to feel hope, though that’s not really the point. It takes viewers on a dark, painful journey into the horrors of the sea. But it shows that there are people like Patima, who, with the LPN, has rescued over 4,000 men.