Ghost brings a different kind of devotional music from Sweden 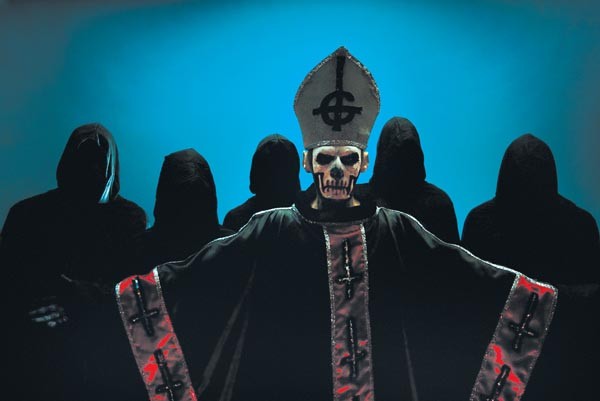 If "beauty is in the eye of the beholder," why do we think of devotional art in such black-and-white terms? Most of us dismiss satanic artwork as "devil worship" rather than recognizing its devotional merits.

Regardless of our reasons, it's this very dismissal that has actually emboldened satanic musical tradition ever since the Middle Ages. As soon as churches started banning musicians from playing certain "tri-tones" (they sounded too devilish), satanic music was well on its way to becoming history's most contentious form of devotional art.

When the mysterious Ghost crept up from the shadows, little was known about this apparition of a band, save for its unbridled reverence for the devil. Not to be confused with the mystical Japanese psych-rock outfit of the same name, this Ghost hails from Stockholm, and looms over the kingdom of heavy metal.

The band's declarative debut, 2010's Opus Eponymous, comes to life by summoning forth a chamber organ, an enchanting conduit for the very foreboding nether-spirits to come. After breathing patient praise, Ghost takes shape with a vicious thunderclap, beckoning horns and ears with its declaration of veneration: "Lucifer / We are here / For your praise / Evil one."

As lead singer Papa Emeritus voices the incantation, his soaring emphasis adds sanguine finish to an otherwise midnight ambiance. He is the omniscient face of Ghost — rather literally, as he's the only band member whose visage we ever see, albeit fully painted in funereal black and white.

Even if this specter does indeed look like the pope's evil twin, he is no mere figurehead. For hell's sake, he is the preacher at the pulpit who directs Ghost's live procession, or "black mass," onstage. Assisted by five hooded musicians, or "unnamed ghouls," Papa Emeritus performs vocal rituals with the choral carriage of a gospel singer.

Somehow, these six slay-makers have managed to beatify the devil's music without obscuring its purpose. On blank pages far removed from heavy metal's dog-eared chapters of brutality, Ghost writes its own ritual of satanic piety. The band members are, undoubtedly, very well versed in all the occult sounds emanating from their Scandinavian homeland. Yet, they are reaching beyond the scare tactics of Swedish death metal and the fright factor of Norwegian black metal to light new candles in the name of the devil.

Opus Eponymous turns hellfire and brimstone into glorious exaltation. A warm-blooded rock record bearing scaly, reptilian features, it delivers all the guts without the gore, proving that some of the heaviest metal is still born of restraint.

Precisely cleaved by a crisp drum attack, its meaty rhythms fall right off the bone for a lean, exacting sound reminiscent of early Danzig. Finger-licking riffs alight from the depths of "Death Knell" to punctuate church bells with wicked, forked tones. Although fiery in aspect, these ghouls' guitars retain an under-cranked quality. Distortion takes a backseat to feeling as the Swedes voyage toward a more timeless, elemental metal sound.

"Elizabeth," a romantic ode to everybody's favorite bloodthirsty Hungarian (the infamous Countess Bathory), embodies the twin forces at play in Ghost's music. Like any work of true chiaroscuro construction, this ballad veers between lightness and darkness. Everything canters until a rather sinister organ emerges to recant the tempo, making way for some polyphonic prayer to the underworld.

Ghost now plans on haunting us further with a follow-up album due out later this year. Internet hype machines have already made a reliably big mess speculating about the album and its creators, like guessing at Papa Emeritus' real-life identity, inspiring posts like: "Dude. He played guitar in that other band? OMG!!!"

Most metalheads have missed the fundamental point of devotional art, trying instead to exfoliate the wonderful mysteries behind the music. Whether or not it's an occult supergroup of a side project, or maybe just a truly unknown evil, Ghost exists beyond any heavy-metal mystery.

It is a vehicle for the devotional endeavors of six anonymous artists. These guys just happen to love Satan and they have a pretty heavy, but still awfully pretty, way of showing it. Now that all six Swedes have their foreign visas in order (their previous Pittsburgh date was cancelled when they couldn't leave the country), they can come and visit us more often; maybe they'll even perform at a deconsecrated church near you.

It's too bad that most of us can't separate the work from the worship because we're too touchy about the very subject of their praise. If we're ever to perceive Ghost for all its unholy beauty, we've got to sacrifice all moral hang-ups and work wonders on ourselves because, let's face it: Wonders never work themselves, even when you deal with the devil.