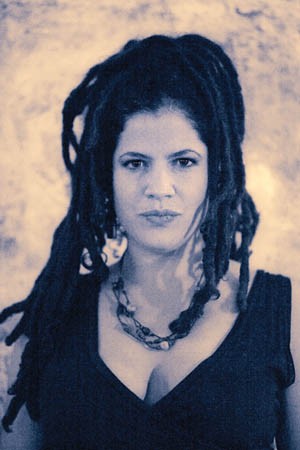 Photo courtesy of Colter Harper
Gea sings in several bands, including Machete, which showcases the music of her native Puerto Rico.

Geña -- born María Eugenia Nieves Escoriaza in Quebaradillas, Puerto Rico, and a Pittsburgh resident for six years now -- works largely within the idiom of Latin music. But that's a lot of ground to cover. Most folks might concentrate on salsa, or folk music or Brazilian samba and bossa nova. But Geña sings salsa, does a bit of jazz and plays other types of world music in addition to the traditional Puerto Rican music of her main vehicle, Machete.

Geña is a presence. Her dark hair is in dreadlocks; she's prone to wearing colorful dresses; her friendliness is disarming. "She looks interesting," explains Carlos Peña, the local guitarist with whom she collaborates in Geña y Peña. "She has a certain style, and that's something that makes you stand out as a performer. I told her that and she said, ‘Well, beauty fades.' But it's not just about looks. She'll be 70 years old and she'll still have that sexiness about her."

Growing up in Puerto Rico, Escoriaza was exposed to music early. "My father would take me to the Bohemian bars where the old guys would all go and sing, and they'd have me sing. I started learning all these old-time songs."

That may have laid the groundwork for her future work, but she didn't remain interested in Puerto Rican folk when she became a teen-ager. "When I finished high school I started singing in a punk-rock band -- you know, a '77-style band, we covered bands like X-Ray Spex."

She'd cobble together English lyrics that she thought were about right, as her English wasn't so great. She wasn't always correct. "When I came to the States and learned what the real words were, I said, ‘Ohhh -- that's what they say? I was really wrong."

Escoriaza, a performer who's concerned about image, is vigilant about staying positive, though now and then she'll allude to hard times. Her move to New York City from Puerto Rico after college was precipitated in part by her having been the victim of a crime, which she only refers to as "a carjacking, kidnapping, whatever." She quickly moves on, refusing to dwell on the incident, but her feelings come across when she discusses the island in more abstract terms.

"I love my island," she says. "But Puerto Rico is far from perfect. Puerto Ricans have a lot of work to do. We have to take care of our children and our families; too many people are concerned about money. There's so much crime and drugs in the cities. We need to put God and family first."

When she left for New York City 14 years ago, it was practically on a whim: Feeling unsafe at home and given the opportunity to accompany a friend who was heading to the city, she set out. Once there, she took up at Theater for the New City, the famous East Village theater. (She describes it as "like a shelter for homeless artists -- not that you get to sleep there, but you don't have to go through all of these auditions and all that. You just show up and get involved."

It was there that she made the connections that would get her a scholarship to Lee Strasberg Theater and Film Institute, and land her a prominent vocal role in the soundtrack of the 2001 film The Believer, starring Ryan Gosling. (She's credited on the soundtrack as María Nieves.)

Geña has become rather ubiquitous around town. You might run into her at Seviche or Tusca, playing to a crowd invested in a meal. You might see Machete playing at Thunderbird Café -- that's where Nic Snyder of the indie band 1,2,3 first saw the group, and decided Machete needed to play 1,2,3's CD-release show last July at The Shop. (It made for a very different vibe than the average indie-rock gathering.)

Escorianza supports herself and her daughter, 6-year-old Alondra Inaru, as a full-time musician, and with a side job teaching children in after-school programs about Puerto Rican culture. The irregular schedule is a double-edged sword: While her days aren't as constrained as those of a parent with a 9-to-5 job, and her weekends are generally free for gigs due to joint custody, weeknight shows are a hassle to schedule. (Before a recent Thursday gig, as she was preparing to leave for the show, she was still figuring out who could pick up Inaru from the babysitter.)

Plus, the guitarist Peña adds, "We always joke that she runs on ‘Latin Standard Time'" -- that is, a little bit behind schedule compared to most others. Of course, Geña has her own loving jabs for Peña.

Escorianza credits Inaru with inspiring her to continue to take music seriously.

"You can't tell your daughter to follow her dreams if you love music but you're sitting at a desk, working for a collections agency or whatever," she says. "You'd be a total hypocrite."

A quick guide to some of Geña's many projects.

Machete Kisumontao: This six-piece is Geña's best-known band; she collaborates here with members of the prog band Chaibaba. The band mixes traditional Puerto Rican music and African influences; originally, it was an educational venture to teach Puerto Rican culture, but now it can be found playing rock clubs, too.

Geña y Peña: A duo (with occasional collaborations with other folks like local Latin everyman Miguel Sague), Geña sings with guitarist Carlos Peña. Softer music, much of it melancholy Puerto Rican traditional music, but with some more contemporary tunes from other parts of the region thrown in now and then.

Preach Freedom: Geña collaborates with the Rusted Root and One World Tribe percussionist on world music.