Getting the Shaft: Despite PNC's promise to cut support for mountaintop mining, activists say it's business as usual | News | Pittsburgh | Pittsburgh City Paper

Getting the Shaft: Despite PNC's promise to cut support for mountaintop mining, activists say it's business as usual

"Are they putting any less money into it? Not that we've seen." 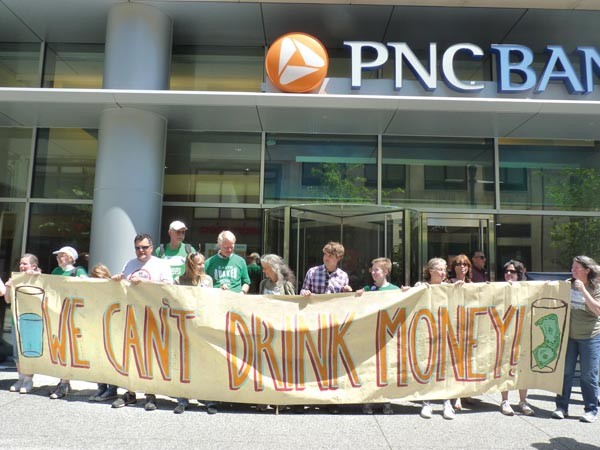 Two years ago, in response to sharp criticism from environmentalists, PNC Bank announced a policy to tamp down complaints that it was financing a controversial mining practice.

Today, environmentalists are still trying to figure out what that policy actually means.

On May 16, about 75 members of the Earth Quaker Action Team appeared outside the bank's Downtown headquarters. One by one, they posted bright-orange invitations on the front door, asking bank executives to meet and discuss claims that the bank is still underwriting mountaintop-removal mining (MTR).

"PNC Bank talks about being green — they pay for advertisements to tell us," Zachary Hershman added. "But do they walk the walk?"

MTR is a form of strip mining which lops off the tops of mountains to get the coal beneath. The dislodged rock is frequently dumped into nearby valleys, where it has been cited as a detrimental to wildlife, drinking water and community health.

In 2010, environmentalists pressured large banks like JP Morgan and Bank of America to withhold financing for MTR projects. That made PNC Bank, which has long had financial dealings with regional mining concerns, their next target. PNC eventually announced a policy stating, as spokesman Fred Solomon puts it, that the bank "does not extend credit to individual mountaintop-removal mining projects or to a coal producer that receives a majority of its production from mountaintop-removal mining."

Environmentalists were heartened, if wary. "I'm saying ‘Thank you' this week to PNC Bank," wrote Amanda Starbuck, the energy and finance program director for the Rainforest Action Network (RAN), at the time. Still, she said, "As with all bank policies, we'll understand what PNC's policy really means in practice ... over the coming months."

That skepticism appears to be growing. Much of it stems from PNC's qualification that its no-lending policy applies only to specific projects, or to firms that get most of their coal from MTR.

"Historically, companies involved in shady practices always do it as a minority of their business," Hershman says. "That doesn't affect the ethics of it."

Activists want the bank to be more transparent about whom it's still lending to, and who it's cut off.

"They recognize mountaintop removal is having negative impacts on local communities," says Starbuck today. "Are they putting any less money into it? Not that we've seen."

At an April 24 shareholders meeting, bank CEO James Rohr boasted that PNC was complying with its policy — and then some. "The mining companies that we do finance have an average of 8 percent of their activity in mountaintop mining," he said. 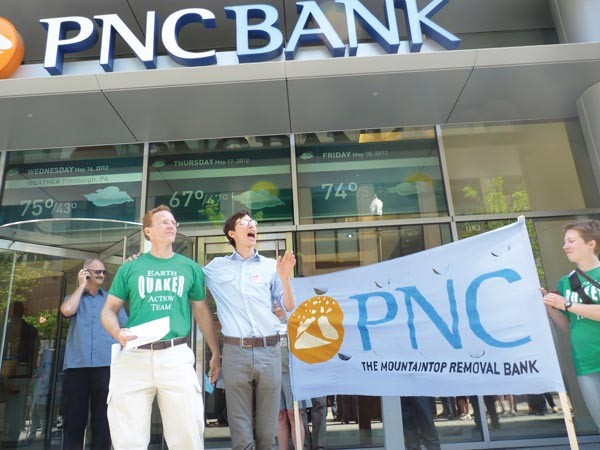 But according to a 2012 RAN report on coal financing, "PNC Bank has continued to do business with most of the largest MTR companies and has exposure to more than 43 percent of the MTR coal mined in Appalachia in 2011."  That's "more than any other bank except for Bank of America" — another bank environmentalists accuse of going back on its word.

Citing client confidentiality, PNC does not discuss whom it is working with. Solomon declined comment on the protests, saying only that "PNC's lending is in compliance with the policy." He would not say if the company has stopped doing business with any company as a result.

But some of PNC's partners are less close-mouthed. When Arch Coal purchased International Coal in 2011, the law firm handling the deal cited PNC Bank and PNC Capital Markets LLC as "lead arrangers" in the $3.8 billion acquisition. And according to an October 2011 filing with the Securities and Exchange Commission, PNC administered a line of credit to Alpha Natural Resources for up to $275 million. According to other SEC filings, PNC was one of the underwriters of the $7 billion merger between Massey Energy and Alpha Natural Resources in 2011. Alpha and Arch engage in MTR mining.

Earth Quakers, a religious-based environmental group headquartered in the Delaware Valley, is giving the bank until May 31 to cease work with companies involved in MTR, or face a withdrawal campaign by depositors. Hershman, the group's campaign director, says participants have already agreed to withdraw nearly $2 million in deposits so far.

"We pledge to continue our campaign of nonviolence until PNC withdraws fully all financing from companies that engage in MTR," a statement from the group asserts.

It may take awhile: Even as Hershman and the others were demonstrating, PNC building guards were tearing their invitations from the wall.