Getting immersed in the interactive work of Brazilian artist Hélio Oiticica

Oiticia is not content simply to invite the viewer to experience his art; rather, he demands it. 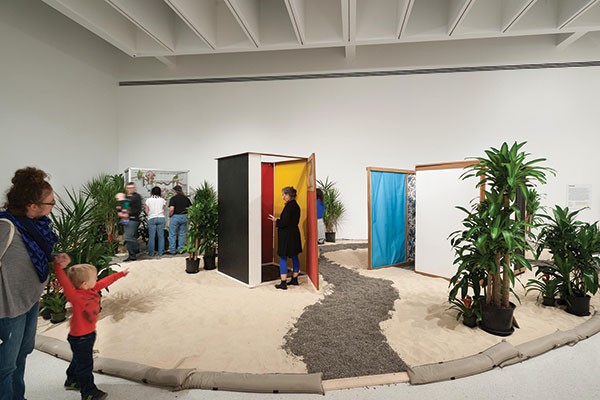 continues through Jan. 2. Carnegie Museum of Art, 4400 Forbes Ave., Oakland. 412-622-3212 or cmoa.org
Hélio Oiticica: To Organize Delirium, a comprehensive retrospective now at the Carnegie Museum of Art, provides an in-depth look at the far too short career of its namesake Brazilian trailblazer. But looking is only the beginning, as Oiticica’s most compelling works require much more from the viewer, calling for interaction and immersion as well.

The touring exhibition, the most complete presentation of Oiticica’s work to date, is co-organized by the Carnegie, The Art Institute of Chicago and the Whitney Museum of American Art. The adventure begins with early works on paper, bearing the marks of Oiticica’s formal education with their focus on geometric shapes, then transcending the classroom by imbuing these with a vibrancy and life filling each page with movement. You travel next to small constructions, dioramas of fantastical imaginary art communities, hanging works in bursts of color overhead, movable feasts of doors and windows pulsing with rich color. All of this is intriguing and lovely, but what comes next, Oiticica’s interactive works, are what enthralls.

“Interactive” is a term and concept with which anyone who appreciates contemporary art is familiar. Whether you are a devoted patron who attends openings regularly, or simply find a gallery crawl a telling venue for getting to know a Tinder date, you’ve been exposed to works that are transformed by your contribution. An observer of an interactive work can, if inclined, take the initiative and become a participant. Often, the only effort required to do so is pushing a button or clicking a mouse, as modern technology has defined interactivity in many cases as the act of prompting a machine rather than a practice of humanity.

This is not the case here. Because here, Oiticica asks for your entire physical presence to move within, literally, his work. (It bears mentioning that many of the works in the show — including the interactive pieces — are displayed according to the regulations issuing by the lending bodies, which is why some, ironically, are more accessible than others.)

Curiously, the environments that inspired him to produce his most vibrant and transfiguring work were not his own. Oiticica’s background was one of relative privilege in mid-20th-century Brazil; he was born in 1937, and grew up not quite in the lap of luxury but of genteel upbringing, refinement and intellectualism. It was the bustling chaos of the favelas, Brazil’s humming and populous slums — slipshod, perilous constructions jammed together on labyrinthine passages, riotous mazes seemingly fragile but resoundingly strong in both structure and spirit — that spurred him to find his truest creation, and establish an artistic signature that went beyond the visual to resonate not as work observed, but experienced.

And Oiticia is not content simply to invite the viewer to experience his art; rather, he demands it. While smaller, contained pieces permit one to observe, separate and autonomous, from outside, there is no way to meet larger-scale installations without entering and becoming a participant, and consequently an element. Several of his creations by nature remain unfinished until the addition of the viewer, who then becomes more than viewer. Once one is through, both in passage and in completion, the work is again incomplete until the next person begins her journey. The voyage might include sand, water, hammocks, video, shacks, private nooks, shared spaces or parrots.

The entry point is Tropicalia, one of what Oiticica called his Penetrables. These installations plunge each viewer into the painting, surrounding him with color, texture and movement. Traveling on paths of stones and pebbles, one enters small favela-like structures, discovering secrets within. While you can walk through Tropicalia, the monumental Eden encourages you to skip, roll, nap, read, frolic — this is not a work you’re meant to peek at and move on. You’re meant to spend extended time here. You’re meant to play. In other works, you’re meant to watch; in another, to relax in a hammock, listen to music, and think about the art you yourself might want to put together, someday.

Oiticica, who died in 1980, didn’t just create art. He constructed havens, safe spaces for exploring, planning, dreaming. But for the thinking they’re purposed to encourage, these environments in and of themselves are remarkably rigid, the result of mathematical precision and obsessively specific direction on Oiticica’s part; his notes on the actual process of building each work, which are part of this exhibition, are vast and meticulous. His part in his own work was strictly controlled, harshly so, with no room for variance or deviation. But our part within it is free.