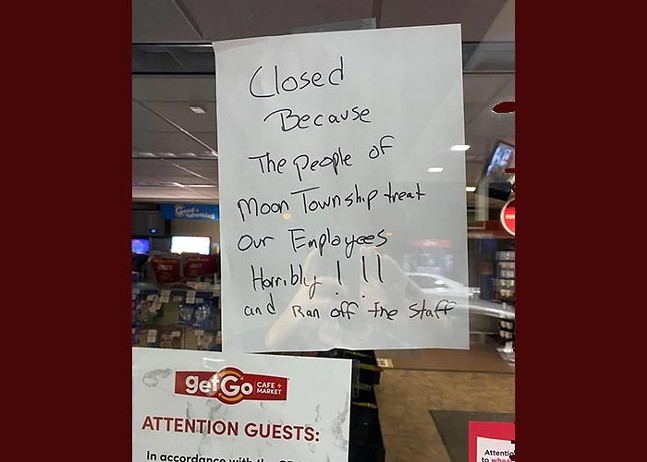 “Closed because the people of Moon Township treat our employees horribly!!! And ran off the staff,” read the sign, which was shared on Reddit.

The GetGo in question was the location at 6507 University Boulevard in Moon Township.

In a statement from GetGo, the company apologized for the incident and said it was the action of one employee and one interaction. This worker closed the store starting at 6 a.m., and was the only employee at the Moon Township location during that time. According to the statement, the worker “had a negative experience with a guest.”

The GetGo reopened at 7 a.m. after other employees were called in. GetGo says the company regrets the message of the note.

“During the brief closure, the Team Member involved posted a handwritten sign in a store window making inaccurate claims about treatment by guests,” reads the statement. “The sign was taken down by another Team Member upon arriving at the store. Importantly, this regrettable sign in no way reflects the appreciation our company and the dedicated Moon Township store team have for those we serve. We apologize to anyone who was offended.”

Workers walking out of service jobs and other forms of protest have become more frequent since the pandemic started, both in Pittsburgh and across the country. This summer in Pittsburgh, several retail stores and/or restaurants saw dramatic closures within the span of just a few weeks. Workers walked off the job, and left notes about staffing shortages or poor management making it too difficult to work.

It’s difficult to exactly point to one cause for Pittsburgh’s pandemic labor struggles, but economists say Pittsburgh’s demographics are likely playing a part, as many of the region’s large number of older workers have been spurred into early retirement thanks to the pandemic, and replacing them with younger workers hasn’t come easy. They also note that, while some industries like hospitality are seeing shortages, there appears to be a corresponding growth in warehousing and logistics jobs. Workforce development experts believe these shifts are likely caused by people looking for better pay and better workplace environments that retail and food service don’t offer.

And while GetGo apologized for the worker who closed the store, many commenters on Reddit supported the GetGo worker’s decision, saying that customer entitlement and rudeness are major problems for retail and service workers.

“Can confirm,” one Reddit commentor wrote. “As someone who works in a restaurant in Moon Township, I have dealt with the shittiest, most entitled people ever.”