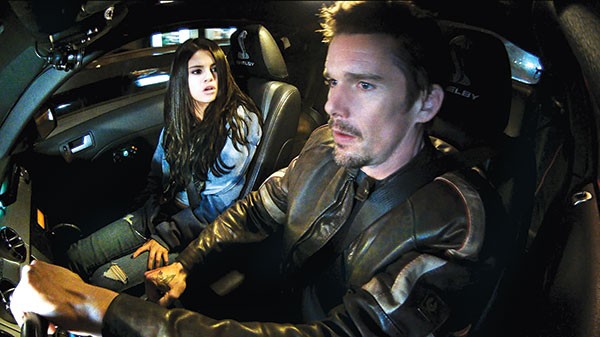 Snakebit in Sofia: Selena Gomez and Ethan Hawke ride out a long night.

Getaway isn't just the title of this car-chase clunker: It's a useful suggestion. But if you somehow get suckered into this drive-by disaster from Courtney Solomon, at least go forewarned.

Forget about plot. A former race-car driver (Ethan Hawke) is forced to drive around Sofia, Bulgaria (that's right, Bulgaria), under the direction of a mysterious Euro Man on the phone, and cause mayhem with a souped-up Mustang. Or Euro Man will kill his wife.  ("I'm watching you always.") So, it's kinda like Speed, but in a car, and in Bulgaria. "Assignments" include: smashing into holiday displays (take that, Christmas!), blowing up a power station and giving a lift to an American teen-age carjacker/tech-head/brat played by Selena Gomez.

The charmless Gomez can't act or keep her seat belt on with any consistency. Her hair, though, is very full and shiny. A-plus hair. Hawke's hair is by Weed Whacker, so that we know he is a troubled soul.

Solomon makes about 100 edits a minute, and most of the frenetic film goes like this: street, Shelby clutch, gearshift, Hawke's furrowed brow, tachometer, Shelby grill, wrecked car, Gomez struggling to react, squealing wheel. Rinse and repeat. Did I mention it was a Shelby Mustang?

In today's world of Internet clip reels, one could imagine Getaway as a very expensive YouTube wreck reel, designed to flaunt an American muscle car wiping out dozens of tiny Euro police cars in various spectacular fashions. There's a lot of anti-police anger here — the cop-car kills are at Smokey and the Bandit 2 level.

There is one good scene, a throwback to classic films like Gone in 60 Seconds, in which the camera stays fixed, looking out the dashboard, as we careen through the streets in one long take, narrowly avoiding carefully choreographed wrecks and near-wrecks.

In the last reel, there are a couple of blackout scenes, which created audible relief in the theater: This piece of junk is over. But alas, the camera whirred back to life each time. There was a street-side resolution caused by deus ex machina (technically, deus ex truck), before we zipped away for the real conclusion, which was breathtaking in its incoherency. Get. Away.