Get your ticket for Jesus Hopped the A Train.

It's the Pittsburgh-premiere production for one of the most exciting new voices in American theater. 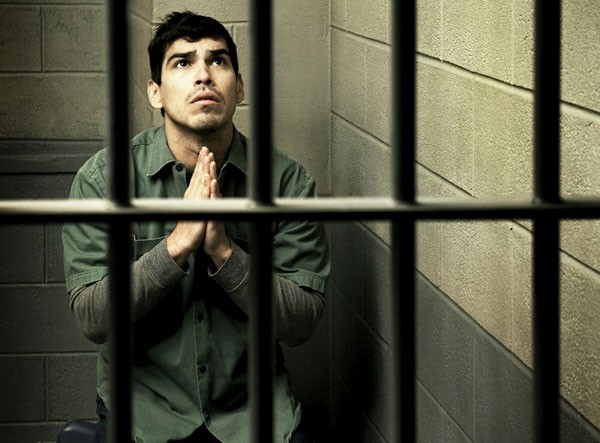 Jesus Hopped the A Train

All art, and especially theater, is manipulative. No matter what academics might tell their students, theater isn't about truth; it's about the illusion of truth. So when we say something's manipulative, we're really saying the manipulation is obvious.

Which is what makes Stephen Adly Guirgis' Jesus Hopped the A Train so remarkable. He may be playing us like a violin, but he does it with such subtlety, and an amazing theatrical vision and voice, we're thrilled to lap it up.

barebones productions presents the Pittsburgh premiere of one of New York's hottest writers. Guirgis' latest show, The Motherfucker With the Hat, took Broadway by storm this past season, but it was Jesus that put him on the map.

We spend the evening on Rikers Island, in New York (beautifully evoked by Douglas McDermott's set, Scott Nelson's lights and Dave Bjorson's sound design). For one hour each day, two prisoners are allowed to exercise in outdoor cages. Lucius Jenkins is a media celebrity for killing eight people and then finding Christianity. Angel Cruz is a young man who, in an act of screwed-up rescue, assaults a man who later dies. The bulk of the play is the conversation and connection the men share.

Guirgis' writing of their scenes is mesmerizing as these two men struggle with faith, guilt, redemption, forgiveness and salvation. He forces audience members to confront their own morality; with a change of emphasis here, or a bit of new information there, what we think we think about these characters and their relationship does continual 180-degree turns. Yes, it's manipulation, but of astoundingly high caliber.

There are also two supporting characters: a draconian prisoner guard and Cruz's wildly incompetent lawyer — characters that, to tell you the truth, point up Guirgis' weakness as a playwright. Or, perhaps, his timidity. Their scenes move the play from the ethereal to the conventional, and it almost feels as if Guirgis included them because he didn't think he could sustain the whole play with only Angel and Lucius. And that, most assuredly, is completely untrue.

Derrick Saunders' direction is remarkable for its restraint. This could be a lurid work, played solely for shock value, but Saunders keeps his focus on the great struggles churning underneath all that surface flash.

Edwin Lee Gibson's mastery at underplaying Lucius' madness-infused rage, terror and loss is nothing less than breathtaking; it's a gift to be able to watch this man work his craft.

In a script of difficult roles, Raul Castillo has the most backbreaking in Angel. Guirgis sends this character on a strange journey through the play, and Castillo makes each step of that trip compellingly real and deeply moving. Leandro Cano and Elena Passarello provide their own vivid spark as the guard and the lawyer.

As this barebones productions staging proves, Stephen Adly Guirgis is one of the most exciting new voices in American theater.