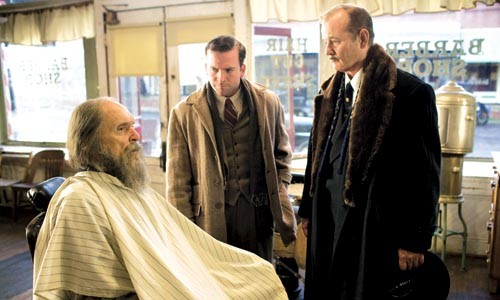 Right from the start, we know two things about Felix Bush, the crazy old hermit who lives in a log cabin on the outskirts of a small town in Tennessee, circa 1930s: He's eccentric, and he's not crazy.

Still, for 40 years, the stories about just how far gone he is have gotten bigger and bigger. Felix (Robert Duvall) knows this, and now that it's time to get low (that is: die), he wants to hear what people have been saying.

So he offers his filthy wad of money to the town's preacher (Gerald McRaney) to eulogize him. No go: not until he asks God for forgiveness for whatever he needs to be forgiven for. Enter an undertaker (Bill Murray) whose business is about to go under from lack of business. He and his young apprentice (Lucas Black) agree to honor Felix's request: He wants a funeral party, while he's still alive, and he wants everyone who knows a story about him to come and tell it.

This is more than enough to suffice a cagey Southern-gothic fable filled with characters who are real characters. But Felix has a secret that made him withdraw from the world, and before his long-time former friend, an ol' country preacher (Bill Cobbs), will attend his party, Felix has to come clean with society and with God. It involves a woman (Sissy Spacek) who remembers him fondly, but who may not when she learns the truth.

Get Low is the best 100 minutes I've spent at the movies in a long time. The acting alone is thrilling, with Duvall the centerpiece: alert, serene and deliberate in a way that calls up everything he's learned as an artist, and then some more. Felix seems at first like Boo Radley, Duvall's legendary screen debut. And then, through his combination of wisdom and melancholy, he grows into a mélange of iconic types in a work that's as cinematic as it is theatrical and literary.

Despite its persistent sadness, Get Low is also a black comedy, and Murray's character especially displays a benevolent whimsy that gets him through the exigencies. ("M'mmm, hermit money," he says when Felix comes to call. "That's good.") Who would ever have thought, 35 years ago on Saturday nights, that he'd become such an able acting partner for the great Duvall.

Director/editor Aaron Schneider, in his feature-film debut, handles the delicately written screenplay with the dexterity of an experienced filmmaker. The script, by Chris Provenzano and C. Gaby Mitchell, is filled with wry kernels about life and death. All of the characters in Get Low are as sincere as human imperfection allows them to be, and their shortcomings are well within the range of absolution. When Felix finally tells his tale, it's one we've heard before, but it's so well told that it's moving once again. In the end, Get Low proves that while there are no new stories left to tell, there are still good movies left to make.