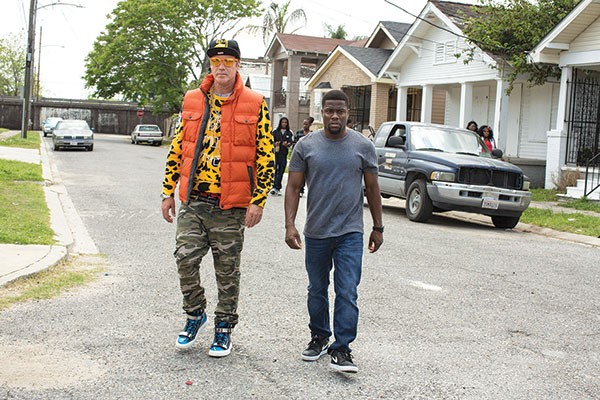 Will Ferrell and Kevin Hart

In Etan Cohen's misguided comedy Get Hard, a rich white jerk (Will Ferrell) asks the only black guy he knows (Kevin Hart) to train him for an upcoming prison sentence. I expected plenty of lazy jokes based on racial stereotypes, and there they were. And just because the film acknowledges its own lazy stereotyping doesn't absolve it from being crass and offensive.

Then there's the barrage of explicit jokes about men having sex with men in prison. It's portrayed, simultaneously, as the worst thing ever and the funniest thing ever. When Ferrell tells Hart he's going to prison, Hart launches into a rant about the variety of forced "ass-pounding" Ferrell can expect. (The term "rape" is never used, because what could possibly be funny about being raped? Imagine a movie making this many jokes about women being raped.)

The homophobic panic level in Get Hard (no, really, in a bromance named after an erection) is off the charts, and winds up being an uncomfortable reveal into the stagnant, creatively bereft minds of the dudes making this film.