Oh, and donating is the only way to get access to the song. 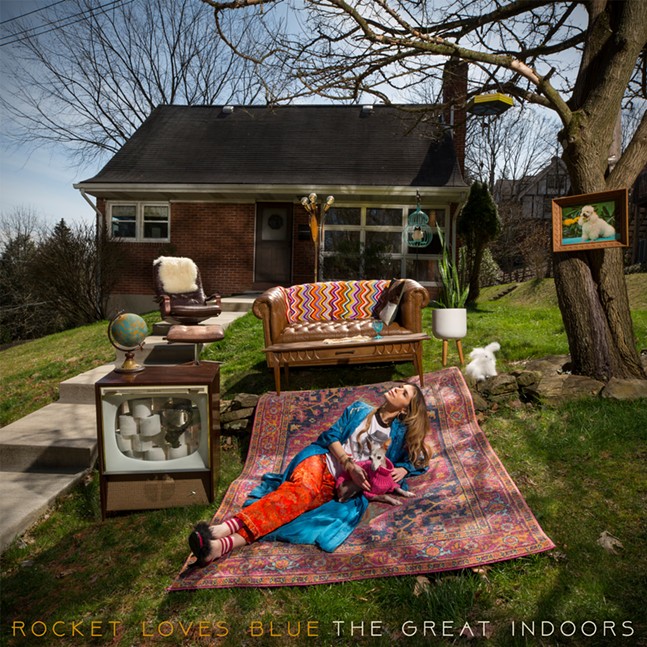 Photo: Heather Mull
"The Great Indoors" cover art
Right now, donations to the Greater Pittsburgh Community Food Bank come with a gift: an exclusive link to download Rocket Loves Blue's newest song, "The Great Indoors." Oh, and donating is the only way to get access to the song.

After a positive response to a rough demo of "The Great Indoors" played on country radio app GimmeCountry in January and February, including people inquiring about the band and leaving comments during the radio shows as the song was playing,  Rocket Loves Blue noticed a spike on their Spotify and social media accounts.

"We are a new band," says Josh Shapiro, one half of Rocket Loves Blue. "[So we thought] let’s roll with it. We weren’t in love with the recording that was being played, we never considered that version 'finished.' We re-recorded almost everything but the vocals, and gave it a brand new mix, with our ultimate game plan being to release it as a single, and see what happens."

The final version of "The Great Indoors" was completed on the afternoon of March 13. After that, Shapiro says things went very fast.

"That evening, it hit us. This song is about enjoying the peace and quiet of staying home ... as we are being forced to stay at home," he says. "'[What are] the chances?' We [had] to do something good with this song. The next day we had the idea of somehow donating the song to a charity."

Shapiro and the other half of Rocket Loves Blue, Nikki Moulios (they are a couple and recently engaged) have a friend who works in radio. They asked her what local organizations needed some assistance and she suggested the Pittsburgh Food Bank.

"They loved the idea [of working together]," says Shapiro. "Game on."

The next few days went as followed: on Thu., March 19, the couple approached a photographer neighbor with the idea. Fri., March 20, the neighbor coordinated an album cover shoot with fellow photographer Heather Mull. Sun., March 22 Shapiro and Moulios moved their living room their front yard, put toilet paper and a gas mask in a hollowed-out TV, steamed some dog clothes "and had a total blast shooting the album cover," says Shapiro.

The Pittsburgh Food Bank campaign was up and running on April 7.

"The turnaround from concept to final product was some of the quickest we’ve ever done," says Shapiro. "As of two weeks ago, I know we were at about $1,500. We’ve played on WDVE for 30 minutes and have done a few small things since then ... hopefully, that number is increasing! This has been such a great project to be a part of."

Pittsburgh City Paper chatted with Shapiro to find out more about the ins and outs of "The Great Indoors."

How did the idea for the song come about? What did the writing process look like?
"The Great Indoors" started as the brainchild of my (Josh’s) cousin Mike McCool from Bethel Park. I am from Pittsburgh, Nikki is from San Diego. We were both in Los Angeles for many years. Two or three times a year, we would come back to Pittsburgh to visit and see family. Every trip back to Pittsburgh, we would jam and write with Mike and go to a concert or two ... with Rocket Loves Blue officially moving to Pittsburgh early 2019. Mike presented the song idea to the band about two years ago, and it slowly made its way into Rocket Loves Blue’s catalog of songs. The vocals were actually recorded while we were in transit from Los Angeles to Pittsburgh. I always thought it was pretty cool that the song started here in Pittsburgh. Took a road trip to the west coast, and was ultimately completed here in Pittsburgh.

How did it compare to other songs you have written?
The writing process is normally just us two in our home studio, bouncing ideas back and forth. Usually obsessing over melody and lyrics. This time around was different because we don’t usually work with a co-writer. It was fun to take an idea, and just run with it. We have about 10 or 12 unreleased songs in our arsenal. Nothing has ever taken this amount of time to put a fork in. Granted, we were traveling and making the cross country move. Everything happens for a reason, and we think the chances of us finishing this song as the country was locking down and approaching quarantine ... all three of us agreed that this song suddenly has a fresh new meaning. Mike decided to not leave his house one evening because it started pouring down rain, a few years later we provide almost 8,000 meals locally through the PGH Food Bank at a time when people are really in need. It’s amazing.

What did you enjoy most about creating "The Great Indoors"?
We enjoy playing this song. And up until recently, we haven’t played this song in front of anyone. We played Club Cafe a handful of times, the song didn’t make our set. We played "The Great Indoors" once at a retirement home last April. Our first Pittsburgh gig. Fast forward exactly 1 year, we are making live videos, and playing the song on Y108 and WDVE.

To get hear the gentle, soulful country tune, donate to the Pittsburgh Food Bank here.