Gerald Dickinson wants to be a progressive megaphone, but will his campaign resonate with Pittsburghers? | News | Pittsburgh | Pittsburgh City Paper

Gerald Dickinson wants to be a progressive megaphone, but will his campaign resonate with Pittsburghers? 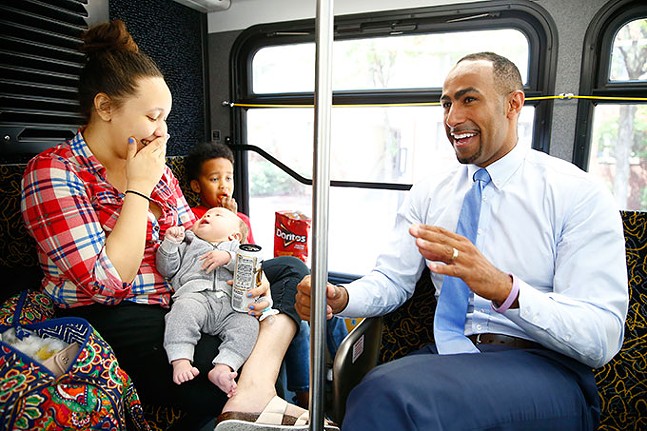 CP photo: Jared Wickerham
Gerald Dickinson
A new wave of progressive democrats is changing the face of liberal politics in America. The best known is likely U.S. Rep. Alexandria Ocasio-Cortez (D-N.Y.), who defeated a longtime high-ranking Democrat in her Bronx district in 2018 with progressive ideas that have bucked the Democratic establishment.
Locally, two progressive state representative candidates, Sara Innamorato (D-Lawrenceville) and Summer Lee (D-Swissvale), defeated moderate Democratic incumbents in 2018. The two women had dedicated groups of volunteers, and each were able to differentiate themselves from their opponents by highlighting incumbents' conservative votes on immigration and abortion-access rights.

Now, University of Pittsburgh law professor Gerald Dickinson is hoping to replicate that success in his run against incumbent U.S. Rep. Mike Doyle (D-Forest Hills). Dickinson’s platform is mostly to the left of Doyle on affordable housing, criminal justice, and the environment.

But beating Doyle will be more difficult than Innamorato or Lee’s victories; there’s not much room to the left of Doyle to outflank him. Doyle’s voting record is generally progressive and he has a record of being active in his district, most recently holding a town hall on climate change. There appears to be little resentment of Doyle in Pennsylvania’s 18th Congressional District. But Dickinson thinks being more vocal and active than Doyle, who is relatively mild-mannered, will benefit him and the district.

“If you are underneath the radar, you aren’t always helping the progressive cause,” says Dickinson. “Being a loud voice is necessary to move the needle.”
Political experts say to take down an incumbent like Doyle, Pittsburgh voters will need obvious signs that Doyle isn’t representing their interests. Right now, there aren’t really any. And so far Dickinson's campaign doesn’t mirror the grassroots successes of Innamorato or Lee, and lacks the same network of volunteers. But that could change.

Will Dickinson's message resonate with Pittsburghers enough for them to dump Doyle?

Dickinson is a Pitt law professor and has written about constitutional law in publications like The Atlantic and The Washington Post. He is a vocal proponent of immediately raising the minimum wage to $15 per hour and banning solitary confinement on the federal level.

“There is a difference between passively progressive, and being vocal on the issues,” says Dickinson. “Why not have a progressive young leader, who is not worried about the district flipping.”

The 18th district is one of the most solidly Democratic districts in the state — only two others are less vulnerable to Republican opponents.

While Doyle supports many of the same policies Dickinson is advocating, one area Dickinson might have an advantage with the district’s urban residents is affordable housing. Early in his career, Dickinson practiced law in New York City and has represented many low-income clients in eviction cases. He recognizes the deck is often stacked against them.

He says that if elected he would work to create legislation to incentivize municipalities to create affordable-housing fixes like Community Land Trusts. Dickinson supports increasing funds to the federal Housing Trust Fund, and also would use his bully pulpit to encourage cities like Pittsburgh to normalize their zoning code so dense development can more easily be built near public transit. He says this could help create affordable units for people who don’t own cars.

Dickinson supports a federal refundable tax credit, in which renters can save hundreds or thousands in taxes each year. “For the working poor, that would be a huge deal,” says Dickinson.

Dickinson's fundraising levels are also significantly higher than Doyle’s previous Democratic challengers. He’s raised an impressive $105,000 so far.
“It shows we are serious,” says Dickinson of his campaign. “We are not just a pilot project.”

“If you are underneath the radar, you aren’t always helping the progressive cause. Being a loud voice is necessary to move the needle.”


Even so, Dickinson hasn’t quite earned the same progressive chops as other successful challengers. About one-third of his 119 individual donations are from Pittsburgh-area residents. He’s averaging about $825 dollars per donation. While not very high, it’s not as low as Innamorato, whose 2018 campaign had 264 individual donations and averaged about $262 each.
This isn’t to say Doyle is getting a higher quantity of local and small-dollar donors. In 2019, Doyle has raised more than 83 percent of his funds from PACs, and has only garnered 43 individual donations. But Doyle is the incumbent, so Dickinson needs to build the groundswell to topple Doyle, not the other way around.

So far, Doyle doesn’t seem very worried. On Aug. 12, when WESA asked Doyle about Dickinson’s candidacy for his seat, Doyle acknowledged the candidates, including Dickinson, who are interested in his seat, but noted no one has secured a spot on the ballot.

“I don't really pay much attention to [them],” Doyle told WESA of his potential opponents. “My job is to represent the people of the 18th Congressional district, and if I do my job, elections take care of themselves. I don't waste a lot of my time worrying about what other people say who may or may not be on a ballot eight months from now.”

Terry Madonna, political pollster at Franklin & Marshall College in Lancaster, says any Doyle challenger will have a tough road ahead, since voters need a clear reason to believe incumbents don't represent their interests — as Innamorato was able to do by highlighting incumbent Dom Costa's history of support for anti-immigrant legislation.

But right now, there seems to be little such frustration with Doyle. He was criticized by environmentalists over some of his more moderate stances during a climate-change town hall. Mike Stout of the Izaak Walton League, a national conservation group, told Pittsburgh City Paper he was “pretty upset” that Doyle rejected a speaker to advocate for the Green New Deal for his town hall. Even so, there didn’t appear to be enough opposition to catalyze substantial momentum against Doyle, as some other local environmental advocates publicly praised him for the town hall.

Dickinson wants to be vocal and spread a progressive message, but it’s unclear if Pittsburghers actually think Doyle isn’t vocal enough. He supports starting an impeachment inquiry into Trump, has been a longtime advocate and cosponsor for Medicare for All, and is a leader in trying to restore the U.S. to Net Neutrality internet rules.

Madonna also says Doyle has the backing of organized labor, has never had a large scandal, and isn’t a lazy incumbent.

“When you go through all this, it is going to be hard to beat him,” says Madonna.