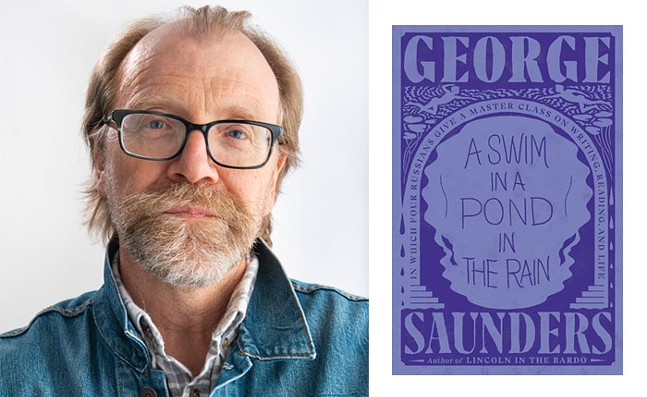 Photo: Zach Krahmer
George Saunders
In A Swim in the Pond in the Rain: In Which Four Russians Give a Master Class on Writing, Reading, and Life (Random House), George Saunders dissects short stories by four writers whose works have proven timeless.

The Man Booker Prize winner (for Lincoln in the Bardo) includes writings on Anton Chekhov’s In the Cart, Ivan Turgenev’s The Singer, The Nose by Nikolai Gogol, and Leo Tolstoy’s Alyosha the Pot, published in 1905 and the most recent story in the collection.

Each of A Swim in the Pond in the Rain’s stories is transcendent, even though most were written in the 19th century.

Why do these stories about peasants and landowners, ne’er-do-wells and widows, seem relevant today?

“I think in every time the good writers are the people who somehow, maybe just in the moments when they are working, can see through the distractions and haze to the essential stuff,” says Saunders, who appears Mon., March 21 as a guest of Pittsburgh Arts & Lectures Ten Evenings series. “That’s why I love the Russians. They seem to be able to step out of real life and go, ‘Ah, death is coming.’’’

Saunders will present his lecture remotely, broadcast via live video projection to an in-person audience at Carnegie Music Hall in Oakland, followed by a Q&A session.

The structure of A Swim in the Pond in the Rain is similar to Saunders’ course on writing at Syracuse University. A story is presented to be read, and then Saunders examines it in depth, page by page, sometimes line by line.

While the book ostensibly is a primer on how to write — and read — stories, it becomes an examination of how writing and reading are inexorably linked.

“I have come to think of it as one purpose,” Saunders says. “Because I’m writing, I’m producing, and that’s fun. Then comes the fatal step when you’ve got to look at it. So then you’re kind of putting on your reader hat and, for me, there was a big breakthrough moment when I admitted that.”

Saunders says he always thought the idea of writing was that one should be in an “exalted state,” where a writer makes great prose and doesn’t have to look at it. “In other words,” he says, “the fact that you felt a certain way when you wrote it is proof that it’s good. But then the breakthrough was, no, that doesn’t mean anything; you’re just stoned. When you come back to read it, if you can be at home with your actual reaction, then you can do something about it. Or, if you’re in a state of denial, you can’t. So, the whole thing is to say I did write it, but it’s not me, it’s of me. Now I can take a breath and look at it and see if I can make it better.”

That is similar to the reader’s experience. It’s essential, Saunders believes, to get feedback from readers, without which the work becomes meaningless.

“Really the only thing a writer has to work with is the reaction summoned up in the reader,” he says.

While writing is often considered to be a scholarly, rational pursuit that requires enormous concentration and attentiveness, Saunders isn’t sure that’s how his process works. He writes:

“When I'm writing well, there's almost no intellectual analytical thing going on. The process is in intuition plus iteration.”

That description seems comparable to athletes performing at the apex of their abilities being described as “in the zone.” While Saunders isn’t sure if “in the zone” is the right description, he agrees the experiences are analogous.

The takeaway of his entire artistic life, Saunders says, is that part of the mind is real but it isn’t “literal or linear.”

“It works in real time without reductive thought, basically …,” he says. “When you’re driving, you swerve. When you’re in conversation with somebody and you’re talking a little faster than your censor and you blurt out something that’s really smart or really funny, that’s a part of your mind.”

And this idea is proven true when he begins revising his work.

“There’s this really lovely thing where you can start out with this really dumb idea or a facile idea or a kind of obvious idea, and if you just sort of keep your good taste by your side, you can work through it,” says Saunders. “The dumb idea becomes a kind of good idea, becomes a really good idea, becomes a profound idea, and at the end of that whole sequence it can become a question.”

Saunders adds that he considers himself working-class, and is not the most articulate or well-read person. But he took comfort early in his writing career after realizing he didn’t have to be “smart” with his first drafts.

“I could be smart cumulatively,” Saunders says, “over many revisions. And I think it’s like sports. After a game, when somebody does some transcendentally wonderful thing, the interviewer says, `How do you feel?’ And they don’t know what to say. ‘I felt good, I gave 210%?’

“But they did do something profound, they were in a profound state, but it just isn’t one that you really need to talk about,” he continues. “It’s obviously less physical when you’re writing, but there’s something about the split-second decisions that come from we don’t know where that are really interesting.” Ten Evenings with George Saunders. 7:30 p.m. Mon., March 21. $10-25. Carnegie Music Hall. 4400 Forbes Ave., Oakland. Livestream pass also available. pittsburghlectures.org