Genesis tribute band The Musical Box knows what it likes

“I think keeping that music alive is important.” 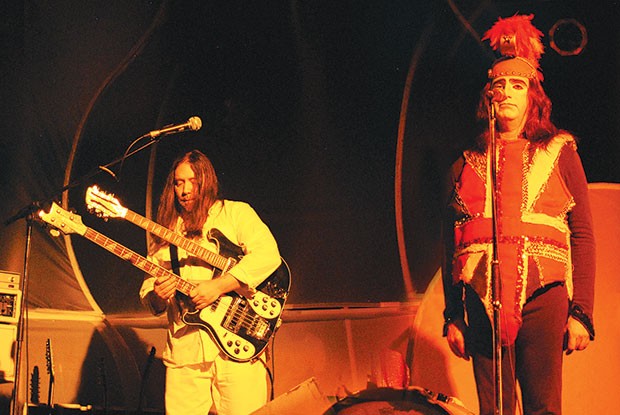 All in: Dennis Gagné as Peter Gabriel

8 p.m. Fri., March 3. Palace Theatre, 21 W. Otterman St., Greensburg. $45-70. 724-836-8000 or thepalacetheatre.org
Tribute bands are all the rage these days; the trend started in the late 1970s with the traveling Beatlemania troupe. Today, nearly every classic act of the rock era has at least one modern-day performer reproducing its look and sound on stages across North America.

Among the most unlikely successes in the tribute-band universe is Montreal-based group The Musical Box. Its chosen path is recreating the experience of an early-1970s Genesis concert. Not the MTV-pop-era “We Can’t Dance” Genesis, either. The Musical Box focuses exclusively on early Genesis, a time when Phil Collins remained behind the drum kit and enigmatic front man Peter Gabriel was the group’s singer.

Though they’re now held in high regard, on initial release, those early Genesis records didn’t sell very well. Epic tunes like “Supper’s Ready,” from 1972’s Foxtrot, might have won over fans of ambitious progressive rock, but that album didn’t even make the charts in the United States. But in the wake of Genesis’ later success — a success that was much more pop-oriented, and eventually featured only three of the earliest members — the group’s early material was rediscovered, taking its rightful place among the best-loved albums of that era.

In addition to intricate musical interplay, stage props, lighting and Peter Gabriel’s bizarre costumes were all integral to the Genesis concert experience. The Musical Box faithfully recreates this vibe. Vocalist Denis Gagné is uncanny in his Peter Gabriel persona; with lavish headdresses and masks — and a voice that’s a dead ringer for Gabriel’s — he holds audiences spellbound through the story-songs of 1973’s Selling England by the Pound, including the U.K. hit single, “I Know What I Like (in Your Wardrobe).”

The rest of the band refrain from going to extreme lengths to look like their Genesis counterparts. Guitarist Sébastien Lamothe plays left-handed, but he does use a custom Rickenbacker double-necked instrument (bass and six-string guitar). Keyboardist Guillaume Rivard uses a vast array of vintage instruments to recreate Tony Banks’ signature sounds. And if one peers over the massive drum kit of Marc Laflamme, a musician in white overalls — Phil Collins’ early-’70s trademark — can be seen. Six- and 12-string guitarist François Gagnon is positioned stage right, seated, just as Steve Hackett was in his years with Genesis (1971-77). While all members of The Musical Box sing, none, save Gagné — who remains in character the entire time — speaks to the audience during the performance.

The Musical Box has fans in high places, including Hackett, the sole Genesis alum who still performs some of the group’s early progressive material in his own concerts. “I jammed with The Musical Box when they played in London, and once in Switzerland,” he tells City Paper. “I think keeping that music alive is important.” With expert playing and top-notch visuals, The Musical Box excels at achieving that goal.

TributeFest rings in Halloween with its ninth annual event