Gene the Werewolf returns with a new plan of attack

"We kind of just hit our stride and realized where we are as people and as this band, and it's really worked out well." 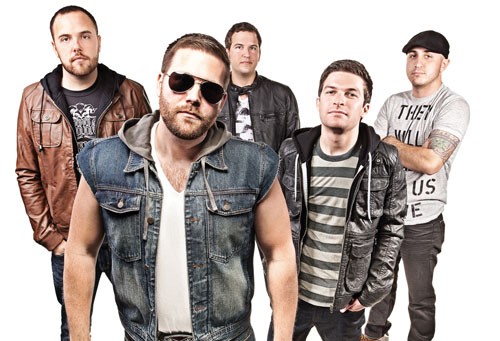 Aesthetically, the biggest change that's come along with Gene the Werewolf's second album, Wicked Love, is the shift from sleazy '70s white-suit attire to grungy denim-on-denim and muddy boots. Musically, not a ton has changed. But the story of the band's past two years is one of adjusted expectations.

"Initially, we took a stab at really going for it one last time, and tried to take it to the next level," explains guitarist Drew Donegan, noting that all of the members had come up in bands that reached some level of success: Punchline, The Berlin Project, Clearview Kills. "But then we kind of just hit our stride and realized where we are as people and as this band, and it's really worked out well: still getting to make serious records, record them for real, and not be a bar band, but not completely exhaust ourselves."

Gene the Werewolf -- centered around "Gene," the alter ego of onetime Punchline guitarist Jon Belan -- is a radical departure, sonically, from the work all the members did in pop-punk, punk-ska and post-hardcore bands.

"I was growing up in the '80s and '90s, and music was a lot different then," says Belan, the band's elder statesman. "Yeah, I listened to The Misfits and Metallica and The Beatles, but I also listened to Top 40 at the time, when they'd play Def Leppard and stuff like that. This is the stuff I really like, and that's what I'm going to play."

Even before 2009's Light Me Up was released, the Van Halen- and AC/DC-inspired outfit got early attention from some of the labels that associate with the kind of music their former bands played.

"This band had more opportunities to get signed before it was even a band -- when it was just Jon -- than anything going," Donegan says. Gene spent some time under the management of Lucas Keller, who had to drop the band when he moved to a Los Angeles firm where he works with the likes of Jimmy Cliff.

"We had interest from Universal Motown," Belan explains. "And we had someone send them our CD. And the guy from the label said, ‘This band is really, really, really good! But … I'm not sure if I like it.'"

A couple of near-misses with Victory Records occurred as well. "The first time, they said they wanted to sign us but the economy was bad and they couldn't," Belan says. Later, band members say, conflicts between the band's management and the label led Victory to rescind its offer.

"We're not jaded by it," Donegan adds. "We play together because we like playing music. At this point I think any other group of guys would've just said, ‘Forget it. Show's over, pack it up.'"

Instead, the five-piece -- which is rounded out by ex-Berlin Project players Nick Revak, Tim Shultz and Aaron Mediate -- went back to the studio to cut another album. Wicked Love was recorded with Jamie Woolford, who also produced Light Me Up, but this time the band traveled to Woolford's digs in Arizona to cut the tracks. Mike Ofca, who helped engineer, also lends his talents on lead guitar for the album.

Included on the album, which Gene is giving away for free, is a cover of "Thriller," which has become a staple of the band's live show.

"When we started the band, that was a song we added to our set because we didn't have enough songs of our own," Belan says. "Then we recorded it and put it out around Halloween. I didn't think it got out to enough people, so when we decided to do this album, we decided to put it on there.

"But I probably speak for all of us when I say we're tired as hell of playing it," he adds with a laugh. "When we get to that point in the set, I just want to fast-forward like in the movie Click."

In the short run, the plan for Gene is to continue on the path the band's already been on: playing shows locally and regionally, and getting music to as many people as possible. (Belan cites so many shows in which audience members said they liked the music, then didn't buy a CD, as why they decided to give Wicked Love away.)

"I think the one thing we're doing right now is weighing out the level of risk," says bassist Shultz. "How much of a chance does this have of being a good show, being a good tour, being a good label? I think we're just better businesspeople. If it's best to play around Pittsburgh, which we love, where we grew up, then that's what it's going to be. Everyone's growing up."

Given song titles like "Rock 'n' Roll Animal" and "I Only Wanna Rock 'n' Roll," the idea of "growing up" may be subjective. But Gene is certainly getting his plan straight -- not bad for a guy who rocks aviators, shit-kickers and a Canadian tux.