The band's members hadn't even reached junior high the last time the Bucs had a winning season. 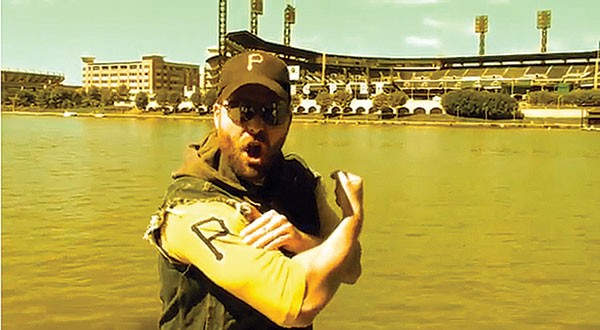 Jon Belan — a.k.a. Gene — shows off his Pirates pride

In the past decade, both the Steelers and the Penguins have made it at least to the preliminary rounds of the playoffs more than half the time — and as a result, local musicians have a handful of team songs they resurrect most seasons. There's "The Mighty 'Guins"; there's "Here We Go"; there's "The Steelers Polka."

But the last time we had any reason to write a Pirates song, it was the likes of Myron Cope doing the job. (Remember his take on "U Can't Touch This," in 1991?) We can't really blame local musicians for sleeping on the chance to record a Pirates anthem; for many of them, it's uncharted territory. But rockers Gene the Werewolf have us covered.

Two weeks ago, the band released a retooled cover of Sister Sledge's "We Are Family," the disco tune that became the 1979 Pirates' theme song. It was at the behest of local promoter (and sports fan) Brian Drusky, who had previously convinced the band to re-do "The Steelers Polka" for the 2011 NFL playoffs.

It isn't a straightforward cover; the band re-wrote the song in a day's time, inserting references to the Pirates, PNC Park and individual standout players. As is traditional for these sports tunes — and for a lot of cover tunes in general — it's being distributed free, and has a Pirates-themed video. It was all recorded on the fly with Gene's live guitarist and engineer, Mike Ofca.

"It's kind of corny and cheesy," says guitarist Drew Donegan. "But our band is sometimes, too."

A Pirates song is a first for Gene, whose members hadn't even reached junior high the last time the Bucs had a winning season. The song hasn't caught on quite like the band's Steelers tune did, but Donegan hopes it's got at least a few weeks of shelf life.

The Steelers song "spread like wildfire," he notes. "This one hasn't gone so fast, but then, as soon as we released it, they lost three in a row to the Padres. We're hoping — not just for our sake — that they start winning again."