“Quality and art doesn’t necessarily have to come from a big budget and money.” 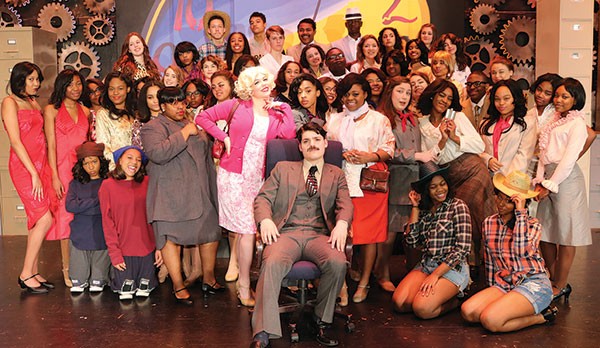 That’s something CAPA senior Paul Watt-Morse, who is nominated for best actor, agrees with. Next year, he’s moving on to the Boston Conservatory, where he’ll study musical theater.

“[Musical theater has] taught me a lot about hard work,” says Watt-Morse. “It teaches you how to work together. I think a lot of sports are super-competitive, but in musical theater you’re working together to accomplish a goal. Every person is super-important to the process.”

And for Watt-Morse, the Gene Kellys are a culmination of his hard work at CAPA. As a freshman, he says, he was in awe of a senior classmate who won a Kelly for his role in In the Heights. Now it could be his turn.

“To think I’m almost where he was is a cool thought. It’s kind of surreal, but it’s great,” Watt-Morse says. “I think [the awards] serve as some extra motivation, and I think a lot of us reach for that because we won’t have that opportunity later in life. Whether we decide to do this for a living or not, we will rarely have the opportunity to see something tangible to recognize us for the work we’ve done. When you get it, it’s just an amazing feeling.”

For sophomore Chisom, there’s no greater feeling than performing on the Benedum stage at the Gene Kelly awards.

“I already feel like a really great power over me performing on the Obama [Academy] stage, but performing on the Benedum stage was like 10 times more exciting,” Chisom says. “Just seeing all those faces and all the lights, and just the adrenaline before coming on stage — it’s just such an amazing experience.”

Students at Obama have had the opportunity to perform at the awards for the past two years because they were nominated for, and won, best musical. But unfortunately, despite nominations for best ensemble, best all-student orchestra, and two for actress, Obama didn’t receive that nomination this year.

“It was a lesson we really had to sit down and talk about this year,” says Kelly McKrell, Obama’s director. “That was hard for me as their leader to tell them they didn’t get to perform this year.”

But rather than feeling defeated, Obama’s students used the disappointment to inspire them.

“We actually found out about the nominations and still had to do three shows, and I’ve never seen students perform so well in my career,” says McKrell. “I was so afraid it would affect them negatively, but I’ve never seen so much energy from high schoolers in my career. I was very proud of them.”

In an effort to stave off the disappointment students can feel when competing in such a high-profile competition, McKrell often tries to steer focus away from the Kelly Awards.

“I was in the Kellys as a child,” says McKrell. “So I understand the feeling of being on that stage and having that opportunity, and I tell them it’ll be something that you’ll be able to tell your grandchildren, that you performed at the Benedum. So they do look at it like an honor, but I try not to make it the focus of the season, because I don’t want them to see it as a competition.”

Instead, she hopes students reflect on how performing in the musical has impacted their lives.

“They open up to the audience on closing night, and they talk about how it changed their lives,” says McKrell. “They say things like, ‘I never thought I’d fit in,’ ‘I never thought I’d have another family or a safe place to go where I can be myself.’ Those comments really resonate with me.”

Having performed in only her second musical at Obama, Chisom says she’s learning to balance her schoolwork with the pressures of rehearsal. And in the end, she says, what she’s learned from participating is what matters most.

“It motivates you to be on top of your schoolwork even more” says Chisom. “Another great thing about musicals is if you’re passionate about it, you can be the same or even better than anyone at any other school. It comes from your passion and how much you love to do it.”