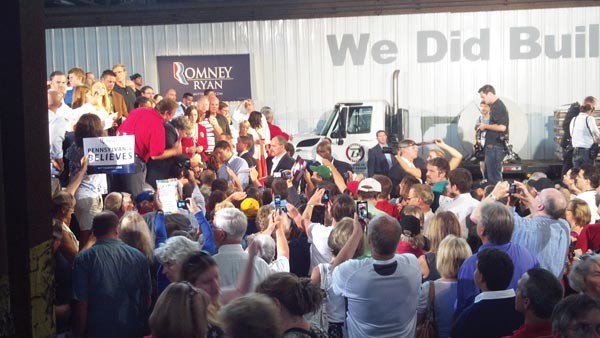 At most, the political scuffle outside Beaver Steel in Carnegie lasted a full minute.

One woman, a supporter of President Barack Obama, and another, backing Republican Mitt Romney, closed in on each other, each waving her cardboard sign supporting her candidate. Few of the dozens of protesters around them — whose attention focused on the cars streaming toward the mill and the trucks trying to get through the narrow street on normal business — noticed the confrontation before it was quickly defused by a Carnegie police officer.

But as Romney's supporter continued on her way toward the rally for vice presidential candidate Paul Ryan, who spoke at the steel mill that day, the other had the last word: "No woman should vote for Romney or for Ryan: They're bad for women."

Perhaps more than in any recent election, women's issues have come to the fore of the 2012 presidential campaign. Democrats are capitalizing on Romney's choice of the socially conservative Ryan, a Tea Party favorite, for his vice presidential running mate, and on the comments earlier this month from Republican Missouri U.S. Rep. Todd Akin, who posited that women are unlikely to become pregnant during "legitimate rape."

Ryan has been drawn into the Akin flap because of a shared philosophy on the subject of abortion. The two men co-sponsored a series of bills in the House, chief among them the "Sanctity of Human Life Act," which sought to define life as beginning at the moment of conception, and to assign the fetus legal rights "irrespective of ... the stage of biological development or condition of dependency." The bill allowed for an exception only in the case of "forcible" rape.

Ryan has repeatedly affirmed an anti-abortion-rights position that makes no exceptions for rape or incest, though he didn't address the subject directly during his Carnegie stop. In an interview with KDKA's Jon Delano, he called Akin's comments "outrageous," but said he stood by his "pro-life record in Congress," adding, "It's something I'm proud of."

That stance, combined with a budget philosophy that would have the federal government significantly cut spending on government programs primarily aimed at helping low-income women and children, has given Democrats a unifying message: The GOP has started a "war on women."

"The number of legislative efforts to reduce women's rights in the past year has been remarkable," says Heather Arnet, CEO of the Women and Girls Foundation, adding that the rhetoric around policing women's reproductive issues has been ratcheting up in recent years.

Arnet points to an analysis by the Guttmacher Institute, a think tank that studies issues concerning women's reproductive health. Guttmacher documents more than 1,100 reproductive-health provisions proposed last year by state governments, up from 950 in 2010. According to the report, by the end of 2011, 135 of the provisions had been enacted — up from 89 in 2010, and 77 in 2009.

The legislation includes waiting periods and mandatory ultrasounds before abortions, and restrictions to insurance coverage. Funding for family-planning services and abstinence-only education were also on the table.

And it's not just reproductive-health issues in the crosshairs. Reauthorization of the Violence Against Women Act has still not been approved, nor has there been Republican support for the Paycheck Fairness Act, Arnet says.

"I find it hard to believe that any woman would look at that and not see that women are being targeted," says Jeanne Clark, chair of the Women's Caucus of the Allegheny County Democratic Party and president of Squirrel Hill chapter of the National Organization for Women.

Not that these stances are new to the GOP, Clark adds. "The difference is they're now held at the highest level of the Republican Party and they have every intention of enforcing those ideas."

But Allegheny County Councilor and Republican Heather Heidelbaugh says she bristles at the idea that women are under attack, and that Republican women are somehow betraying a sisterhood.

"I don't believe in any shred of my being that the Republicans are initiating a ‘war on women,'" she says, adding that the Democrats are using women as pawns. "I think this is something that has been created in this race to help the Democratic side and it's wrong."

Akin's comments and the impact they are having on the presidential campaign are unfortunate, she says.

"His statement was medically incorrect and hurtful in some ways. But he is a good man," she says.

Melissa Haluszczak, an Allegheny County Republican delegate at the Republican National Convention this week, says her support of the GOP is as much about other issues as it is about a stance on abortion.

"We have so many broader issues, and that is getting this country back on track," she says, adding that she worries about the debt the government is accumulating and the expanding power of the federal government.

"They're taking away from the fact that the economy is in the tank," she says.

She says the Democrats' attempt to transfer anger at Akin's comments to Ryan just because they voted the same way is unfair.

"One person's verbal mistake or thoughts aren't someone else's," she says. "It's guilt by association."