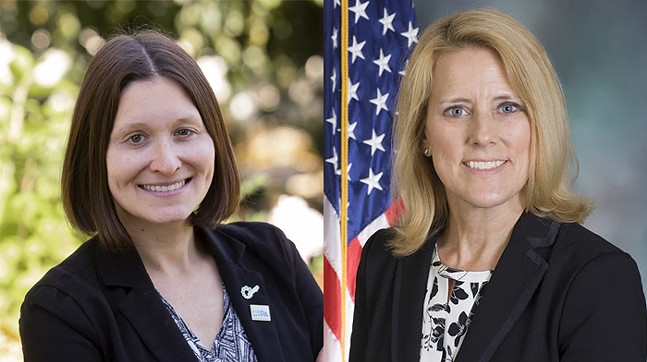 Photo courtesy the campaign/official state portrait
Lissa Geiger Shulman and Lori Mizgorski
Pennsylvania’s 30th state House District has, politically, been changing fast over the years and is currently the region’s most competitive district. In 2018, state Rep. Lori Mizgorski (R-Shaler) won the district by less than five percentage points, and Democrats have made the district a target to flip. Despite being mostly in Republicans hands, many district residents are shifting to the left, particularly in wealthier suburbs like Fox Chapel.

With a close race likely this November, candidate Lissa Geiger Shulman (D-Hampton) is calling for a thorough debate between her and Mizgorski, so many of the district’s voters, especially the swing voters, can better understand where the candidates stand on important issues.

Geiger Shulman says she has accepted an invitation for a debate from the League of Women Voters. So far, Mizgorski has not.

In fact the League of Women Voters of Greater Pittsburgh says it has received no response at all from Mizgorski, despite several attempts to reach her.

"We have invited her to participate in a LWVPGH non-partisan virtual candidate forum for the 30th Legislative District,” wrote Judy Clack of LWVPGH in an email to Pittsburgh City Paper. “We have tried many, many times to reach her by phone, email, and Facebook Messenger message on her campaign's FB page. We have received no response.”

Geiger Shulman says she is ready to debate virtually, in-person, live or recorded and criticizes Mizgorski for skipping out on any debates.

“My opponent has already dodged other forums held by local organizations representing District 30 constituents. For more than a month now, the nonpartisan League of Women Voters has been trying to contact her,” says Geiger Shulman. “It seems clear that she does not want to be held accountable for her record over the last two years nor does she offer solutions for the urgent challenges facing our communities.”

A request for the Mizgorski campaign was not returned.

Geiger Shulman says there are many important issues in the race for District 30, which includes Fox Chapel, O’Hara, Shaler, Hampton, and Richland, and that Mizgorski must answer to those issues so residents know her record before voting.

She criticized Mizgorski’s vote on HB 800, a bill that would have expanded publicly-funded vouchers for students who attend private and religious schools. The bill was passed largely on party lines and vetoed by Gov. Tom Wolf. According to the Keystone Research Center, any expansion of the voucher program is “problematic because of a complete lack of financial and educational accountability” and because the state program already subsidizes “exclusive private schools catering mostly to the very affluent.”

“Meanwhile, as a former public school teacher, I support universal pre-k, fully funding schools and teachers, and ensuring all districts have the PPE and technology resources needed for remote or hybrid education during COVID-19,” says Geiger Shulman.

Mizgorski’s campaign page says she “knows how important it is to adequately fund education and provide safe schools while maintaining fiscal responsibility for taxpayers.” The website also calls Mizgorski a “bi-partisan leader who delivers results for the 30th Legislative District.”

Geiger Shulman takes issue with this framing and says that Mizgorski has voted with the GOP 98% of her time in office. She also says that voters in the district have been concerned about the state’s COVID response, and that the differences between the candidates should have been ironed out in a debate.

Another issue growing in importance in the North Hills is the environment. Mizgorski’s campaign site says “She continues to advocate for clean water ways” and is an advocate for the environment. But Geiger Shulman says this characterization is up for debate, and she calls out Mizgorski's votes to provide tax breaks to the petrochemical industry.

Petrochemical plants refine natural-gas into plastics and other products, and have been known to contaminate water sources. A recent story from ProPublica shows that COVID rates have been higher in the part of Louisiana where the petrochemical industry thrives.

Geiger Shulman says Mizgorski voted to “give over $1.3 billion in taxpayer dollars over the next 30 years to subsidize the fossil-fuel and petrochemical industry. These subsidies are estimated to come at a cost of $8.8 million per permanent job, which number at a just few hundred per plant. This vote occurred in July as Pennsylvania began facing down a $5 billion deficit.”