Wood-fired meat and veg, paired with delectable sauces, make this Argentine eatery in the Strip worth stopping at 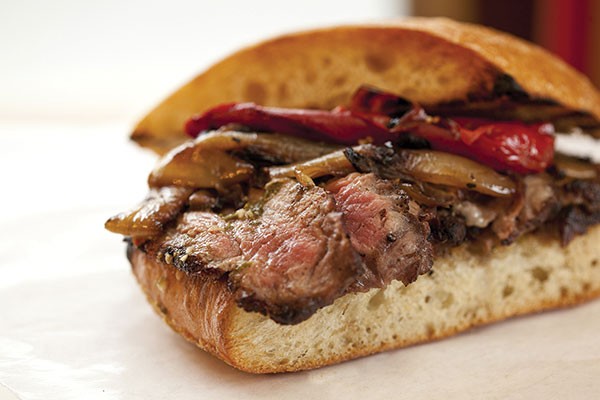 One sure sign of spring is that, along with the scent of flowers in bloom, the appetite-stimulating aroma of backyard barbecue fills the air. Commercial bakeries can have the same effect, but it's surprisingly rare for restaurants to draw customers by appealing directly to their olfactory sense.

That's why our noses really began twitching — almost before our eyes did — when they sensed a new storefront in the Strip. Cordwood stacked in the patio beside Gaucho Parrilla (parrilla means "grill" in Spanish) drives the point home: Argentine-style barbecue served here!

Argentine barbecue is inexplicably rare in the United States. Here, we have our own style of barbecue — many, actually — and a recently discovered appetite for Brazilian churrascarias, those restaurants where servers roam the dining room proffering an array of skewered meats. But it is actually Argentina, not Brazil, that is home to arguably the world's finest beef. The pampas grass of the Argentine plains is nearly perfect for steer to eat, resulting in pasture-fed beef that puts either grass- or grain-fed cattle from Middle America to shame.

Having said that, Gaucho doesn't import its beef from back home. Instead, it relies on the burning of all of that wood to infuse its meats — mostly beef, but also chicken, sausage and seafood — with flavors intense enough to weaken a vegetarian's convictions.

The interior is minimalist: The customer section is limited to a few counters and blackboards, while the wide-open kitchen is dominated by a commercial-grade wood-burning grill. Meat, the unapologetic focus of the menu, is offered alongside grilled vegetables, roasted potatoes and salads, but in some ways, the most indispensable items are the sauces. Gaucho offers four condimetos: classic, pesto-like chimichurri; ajo, deep yet mellow garlic and herbs in olive oil; cebolla, an earthy concoction of caramelized onions, herbs, olive oil and vinegar; and pimenton, or charred pepper. The latter two are purees based on vegetables rendered sweetly smoky through fire-roasting. All of these are offered a la carte; none are paired specifically with any one dish, leaving diners free to completely customize their entrees. Grilled Portobello doubles down on smoky earthiness with the cebolla, or takes a turn for the bright and herbal with chimichurri, while shrimp finds contrasting piquancy in the ajo or complementary sweetness in the pimenton. We found testing pairings and indulging our palates' whims a rewarding way to experience the options at Gaucho.

The grilled meats and vegetables were uniformly excellent. Beef remained tender even as it charred, and the chicken was smoky and moist. The shrimp was full of sweet, succulent flavor, staying juicy despite the heat of the wood fire. Vegetables were either suffused with umami-evoking smoke or that particular, intense sweetness brought out by slow roasting.

Beef is available in five cuts (we tried skirt and ribeye), and chorizo can be ordered spicy or garlicky, but we found it hard to go wrong with any variation. Our only complaints were that the beef was a bit carelessly butchered, with not only fat but also gristle left intact; and potato chunks, though deeply browned, were chalky, possibly from a too-long interval between cooking and serving.

Which gets to one of the inherent difficulties in running an ambitious restaurant in a small storefront: With a lot of ebb and flow of customers, Gaucho is at perpetual risk of running out of things (we especially hoped for empanadas, but there were nada by mid-afternoon), while more plentiful items will inevitably sit.

But with any luck, and with a steady flow of barbecue aficionados, Gaucho will have time to work those issues out. While its flagrant appeal to the noses of passersby should draw prospective diners in, the delicious mix-and-match of authentic Argentine sauces and wood-smoked meats and veggies will keep them coming back.