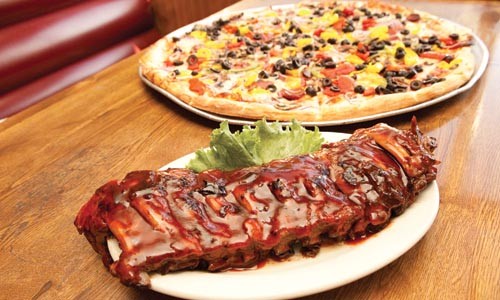 Here's a conundrum for you: What makes a hot spot hot? A hip location? Sexy interior design? Scintillating food? Are the beautiful people all there, or is it some imprecise calculus involving all of the above?

Perhaps it is simply the heat of a wood-fired grill. On the face of it, nothing else explains why Gateway Grill -- "Monroeville's only Wood-Fired Grill" -- was so packed on a weeknight that patrons were spilling out into the parking lot. Located in a nondescript storefront in a back-road strip mall, shoehorned between a motel and a miniature golf course, Gateway Grill hardly announces itself with a fanfare. This left the food as the prime suspect for attracting the hungry horde with whom we waited for a table. As we watched pizza after pizza being carried from kitchen to tabletop, we were eager to be served.

Inside the dining room, we were surrounded by the noisy din of families and friends out for a good time. We formed another theory: Perhaps Gateway Grill's proximity to Gateway High School has propelled it into the popular crowd. The walls were covered with framed news clippings about the school and yearbook pages from the 1950s through the '80s. Hairstyles aside, some were true time capsules; we were seated below the Future Homemakers of America, circa 1970.

Beyond pizza, Gateway Grill offers a lengthy menu of classic Pittsburgh bar and grill fare, heavy on the meats and carbs. The grill itself made less of an impression than we'd hoped: Other than ribs and a couple of steaks, not many menu items received the flame treatment. So we sampled as broadly as possible, hoping to hit paydirt.

The rib appetizer combo was an apt preview of our meal to come. The wings were moist and tasty beneath a tangy, subtly spicy sauce, and the ribs were downright impressive, fall-off-the-bone tender and with a good smoky flavor that a smear of standard barbecue sauce failed to smother. Yet the provolone sticks were merely passable, and a pair of delicious-looking potato skins turned out to be devoid of any appealing flavor or texture.

On the other hand, the pizza justified its popularity, with a hearty crust that balanced crispness on the outside with fluffiness on the inside and just the right amount of browned, gooey cheese. If the pie was a little on the greasy side, well, we'll chalk that up to the territory.

We tried two items from the wood grill, the prime-rib special and chuck-roast sandwich. The prime rib acquitted itself well with good beefy flavor and a savory pool of jus, but it was outshined by the humble chuck roast, which was robustly flavored, succulent and generously-portioned. This should be Gateway Grill's signature sandwich.

The Grill also offers several variations of the Philly cheesesteak -- plain, deluxe, classic and classic deluxe -- with the main differences being the number of ingredients and type of cheese. Angelique ordered the "Classic," described as "old-school Philly ... just like a South Philadelphia street corner" and, as per the menu, topped with aged sharp cheddar. She was taken aback when her sandwich arrived looking as though it had been painted with yellow school bus paint. Processed American cheese may be an authentic cheesesteak preparation, but it was not what the menu had led her to expect. She was disappointed, but Jason was forgiving. He thought the cheesesteak -- stuffed (but not overstuffed) with chopped prime rib and served on a crisply toasted roll -- was a good one.

After these qualified successes, we had high hopes for our cheeseburger, but it was a thorough disappointment -- a flat, bland patty with neither hearty flavor nor charred edges. The fries on the side were soggy with not a hint of crispiness.

If Gateway Grill is, indeed, the only wood-fired grill in Monroeville, then we encourage the good people of that suburb -- and visitors who hunger for a locally owned alternative to the usual suburban chains -- to partake of its pizza, ribs and excellent chuck-roast sandwich. Extra credit for being a Gateway High graduate and finding yourself on the wall.