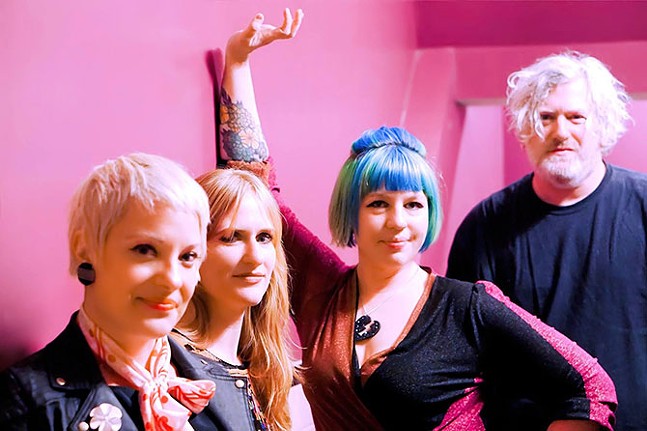 A lot can happen in a year.

In Garter Shake’s case, a year’s time has brought them a new band member, a small dose of local notoriety — the alternative/indie rock group were featured on WYEP’s The Local 913 — and stage time at major Pittsburgh music festivals such as Millvale Music Festival, Three Rivers Arts Festival (TRAF), and Deutschtown Music Festival.

“We’ve been able to get in front of audiences that you may not find in the traditional club scene in town,” says Kathryn Heidemann, the newest member of Garter Shake. “It’s really important to us to make sure we are accessible to new audiences that may not be active members in the Pittsburgh music scene.”

Heidemann joined Garter Shake – now made up of herself, Becki Gallagher (lead vocals, guitar), Jenn Jannon-Fischer (guitar, vocals), and Steve Gardner (drums) — around this time last year after responding to a post in the Pittsburgh Women Musicians group on Facebook. The band was looking for a substitute guitarist and Heidemann was looking to be involved in an active band but didn’t have the drive or resources to start one from scratch.

“I learned the songs very quickly and had my first show about a month later,” she says.

This was the arrangement for about five months, with Heidemann substituting in until bassist Maura Jacob, who also plays in doom-post-punk band Action Camp, felt overcommitted with the two projects in addition to graduate school and left Garter Shake.

“I felt like I was holding back because it was still in my mind that I was a sub, so to speak,” says Heidemann. “As a songwriter, I didn’t want to necessarily invest 110 percent knowing I would be leaving. When the decision happened that I would be coming on as a permanent member, a different part of me was released. I allowed myself to let my guard down at that point. Almost a week later I contributed a song to band, ‘A/B.’”

That was the start of a new beginning for Garter Shake, a shift Gallagher felt when the group was practicing for TRAF.

Heidemann went on to say that the group has "become one voice and it seems the band has gotten a lot more confidence, a little bit harder and energetic. We have a lot more ownership as who we are individually but also who we are as a band. I’ve heard from audience [members] that we click together as a band and have officially found our Garter Shake sound.”

Gallagher feels that this mentality of being true to themselves, both personally and collectively, is the reason that the band has had so much progress in a year. In addition to Garter Shake, Gallagher is part of Pittsburgh-based rock band LoFi Delphi.

“This is my first time being in two bands,” she says. “Garter Shake found its way a little bit quicker than LoFi Delphi because I think that the four of us are kind of unapologetic in who we are and when we play to our audience. We are ourselves 100 percent of the time and that resonates with people 100 percent of the time.”

In the next 12 months, Garter Shakes hopes to start recording, either in late winter or early spring. With the addition of Heidemann, they have a lot of new material ready to be heard not only at shows. The group also plans to split their time between Pittsburgh and Ohio, as Heidemann now lives in Cleveland, for more coverage.

“I moved to Cleveland in August and it’s been fun to bridge the Ohio-Pennsylvania network,” says Heidemann. “We love the Pittsburgh music scene, but we’re excited to get our music out there in a more regional base.”