Garfield restaurant Fish Nor Fowl's transition to pasta pays off

CP photo: Joie Knouse
Roasted cauliflower cache e pepe
Technically speaking, Fish Nor Fowl is an "American eatery," but in practice that just means they're not beholden to any particular cuisine. Nothing is set in stone, global influences abound, and the website boasts that the Garfield restaurant's identity can't be "defined nor classified."

That willingness to evolve and experiment came to a head in September, when the menu transitioned mostly to pasta from its previous incarnation which was broken down into "small, garden, and large" sections. Those categories are gone and now the menu offers a variety of Italian and Mediterranean dishes, with selections like cacciatore, branzino, and cacio e pepe, and some unexpected dishes, including a crostini section and a côte de boeuf.

CP photo: Joie Knouse
Bone marrow and oxtail crostini
The restaurant’s name may be a bit open-ended, but inside, it’s translated into a distinct theme. The main floor feels natural and earthen, playing off its wild name. There’s a communal feel from the long tables that take up the majority of the dining room, as if the restaurant knows to make room for the adventurous eaters. Upstairs, a second bar overlooks the dining room.

Sipping on the deliciously light gin and tonic made with suze, limoncello, basil, and roasted lemon, I started out with three small plates: a whipped ricotta crostini, a veal tartare crostini, and gnudi.

Gnudi (pronounced “nudie”), was made memorable only by its accompanying mushroom Bolognese. The crostinis would be more aptly called toast, not crispy enough and far too thick. 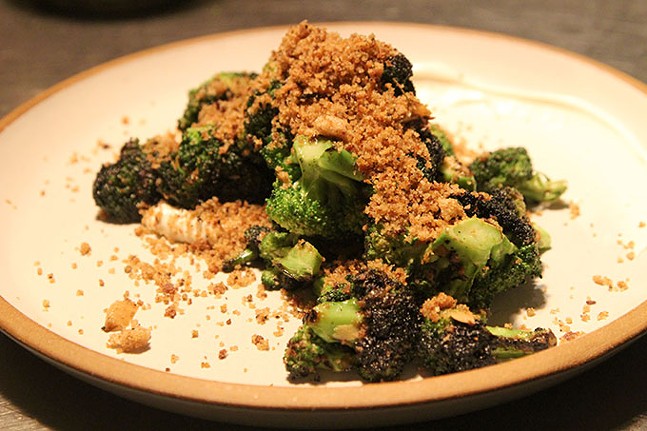 CP photo: Joie Knouse
Charred broccoli
Two lushly piped swirls of ricotta — whipped to the texture of light mascarpone cheese — decorated the first crostini. Ricotta’s trademark grainy texture was completely whisked out, leaving behind was a creamy, citrusy cheese. The veal tartare, a rendition of the Piedmont dish tonnato, was one of the most well balanced tartares I’ve had the privilege of eating. A light tuna sauce paired well with the mild meat, the mix of capers, garlic chips, shallot, chive, and horseradish rounding out the flavor.

For the final course — paired with a pleasantly tart German Pinot Noir chosen off of the long wine list — was mafaldine, a ribbon-shaped pasta tossed with crab, bonito, lobster mushrooms, and spices, along with a side of risotto.

CP photo: Joie Knouse
Inside Fish Nor Fowl
Gremolata, a garnish made from citrus, parsley, and garlic, changed the feel of risotto. The rice dish was characteristically creamy, but when matched with a layer of citrus, became notably light.

When the pasta was delivered, it was moving, the thinly-sliced bonito reacting with the heat. The pasta itself, even without the added cool factor of dancing fish, was incredible. Unlike other seafood pastas, it wasn’t in a cream sauce — expectedly rich, but in a way more similar to ramen than an Italian pasta.

Fish Nor Fowl, as the idiom goes, is neither here nor there. It’s everything and anything all at once, but somehow, it works. 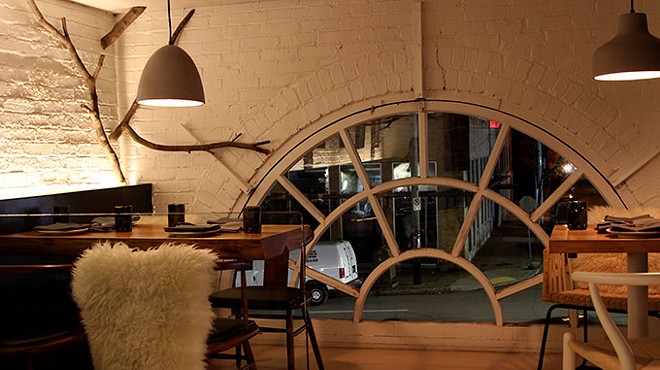 Tiramisu for TWO
This is not your average tiramisu. It’s a bowl-sized dessert, specifically built for two. Eat it alone, I dare you.

Pasta Happy Hour
Fridays and Saturdays, the restaurant hosts pasta happy hours. Grab a pasta and a wine for half the price.

Plant Wall
Exactly what it sounds like. A whole wall of plants.