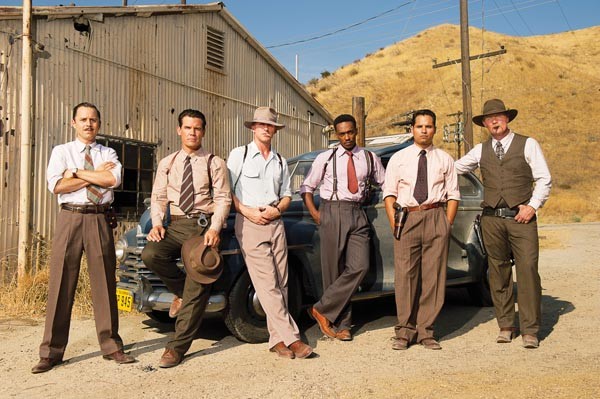 Ruben Fleischer's Gangster Squad got an unwanted burst of publicity after last summer's Colorado megaplex shooting, when its trailer depicted some of the film's characters shooting up a movie-theater audience. So the release date was pushed back, the scene cut and the film slightly re-tooled.

But have no fear, fans of glorified violence: There's plenty left! Why, just in the first five minutes, we see: a man torn in half while chained between two cars (then eaten by coyotes); a hand severed by an elevator; an attempted rape; a woman slammed into a Murphy bed; and a brutal fist fight.

A voice-over tells us that, in 1949, "Los Angeles belongs to Mickey Cohen." The East Coast gangster is making a play for the West Coast vice rackets and it's up to the Los Angeles police to stop him. So grizzled Chief Parker (Nick Nolte) puts together an off-the-books team tasked with destroying Cohen's burgeoning empire. Never mind procedure or legal doo-dads, he counsels — "It's not a crime wave, it's an enemy occupation."

The story is based in reality in that: There is a city called Los Angeles in California; Cohen and Parker existed; and the L.A.P.D. does have a checkered past when it comes to by-any-means-necessary law enforcement.

Don't expect the story and mood of similarly themed L.A. Confidential or The Untouchables, despite all those cool Fedoras; this is a B-grade actioner prettied up with A-list stars. Not much plot or detective work — just guys driving around, snapping out big guns and "lighting it up" — while upbeat jazzy music plays.

We're asked instead to be captivated by a careen through car chases, car wrecks, car explosions and an assortment of vicious assaults. Of course, the squad has the imprimatur of "right." (I'm kneecapping you for your own good and for the good of the city, buddy!) But this casual violence by the good guys only undermines the film's pretend message about curtailing bad guys. When queried about the ethics of it all, squad leader Square Jaw shrugs: "This is the only way we can beat 'em." Solving problems unilaterally with bullets: Feel free to discuss.