Games of the Mind at Throughline Theatre

As usual, F.J. Hartland doesn’t disappoint in the laughs department

GAMES OF THE MIND 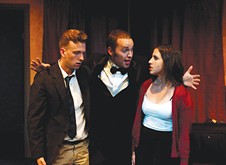 To my way of thinking, there’s not a funnier gag-writer in Pittsburgh than F. J. Hartland. His lines can snap and crackle, and his plays are usually an occasion for unbridled hootin’ and hollerin’.

So I was more than ready for his Games of the Mind, making its debut at Throughline Theatre. The play is set a decade ago and concerns students at a Catholic school and their attempts to win a local TV trivia contest. The head nun, Sister Bridget, is determined to break a 40-year losing streak, and enlists school nerds Margaret and Gregory to win the cup.

Games of the Mind also takes place in the present day, when students return for a school reunion. We learn what’s become of them since the contest, as well as how various people influenced the outcome of the game.

As usual, Hartland doesn’t disappoint in the laughs department — big jokes and small throwaway gags land repeatedly. And he has set up a tension-filled plot, a comedy essential.

So I was wondering why I wasn’t having a better time. Since I’m assuming this is a first draft, there’s undoubtedly a lot of underbrush Hartland will be clearing away; on several occasions, the audience gets ahead of the play, waiting for the playwright to catch up, and that’s never good. Also, the play’s tone shifts wildly, from goofy skit to slamming-door sex farce to acid-dipped Durang-style confrontations; it makes the play feel like a hodgepodge of scenes rather than a cohesive whole with a focused dramaturgical purpose.

Director Allison K. Weakland could also spend more time focusing the play, tightening the pace, rethinking the blocking and sharpening the playing style. All the laughs are played on top; at first, that can be funny, but it quickly becomes wearying.

Karter Schachner and Katie Trupiano are bright, high-energy performers who easily move the show forward. Alaina Gilchrist gets her share of laughs as — what used to be known as — the girl of easy virtue, and Maura Underwood makes the comedic most out of her role as a drunken TV broadcaster.

Hartland’s got something here, he just needs to start digging it out.