Game On is a musical journey through life's regrets, joys, and second chances

What’s in the boxes? Sometimes cash, sometimes trips, sometimes the painful realization that your life sucks.

Part Family Feud, part Deal or No Deal, part existential crisis: Pittsburgh CLO’s Game On is a musical journey through life’s regrets, joys, and second chances. And it's in the form of an interactive game show.


The crowd becomes the “live” studio audience for the game show as contestants play for a chance to win a $10 million jackpot. It’s not quite immersive theater — audience members don’t really play for money, but game-show lovers rejoice: everyone does have a chance to be called on stage and answer some Family Feud-style questions.


The rest of the audience is encouraged to participate by cheering on the actors when the "applause" signs light up above the stage, but no one really needed much prompting during the show. The script is full of laughs and while there is a heavier underlying theme questioning the purpose of life, the show never takes itself too seriously, with songs full of silly lyrics, rhyming words like “Guarantee” with “I’ve gotta pee!”


The set design is super fun, and you really do feel like you’ve walked onto the set of a game show when entering the intimate Greer Cabaret Theater. Game On's set and game play most closely resembles Deal or No Deal, with about 30 numbered boxes on stage behind the contestants. Contestants choose one box to keep, then take turns eliminating the remaining boxes from the stage. 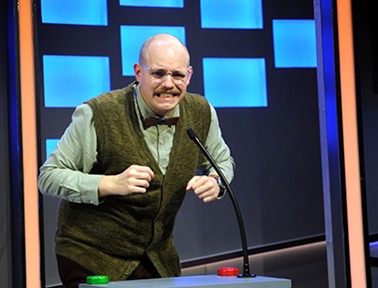 Photo: Matt Polk
Connor McCanlus as Felix in Game On

What’s in the boxes? Sometimes cash, sometimes trips, sometimes the painful realization that your life sucks. Wait, what? Much like Howie Mandel calling “the banker” on Deal or No Deal, host Monty Price (Jason Shavers) has to check in occasionally with a woman behind the scenes, shown only in a projected silhouette, who sets the rules. Is she the banker? God? Should we even care? There’s money on the line, people!


Game On, created by two Pittsburgh CLO alumni, Marcus Stevens and David Dabbon, was first performed as a staged reading at the company's inaugural SPARK festival this spring before being made into the current musical through the EQT Commissioning Fund. The production is now over a month into its nearly three-month run, and it's easy to tell the actors are comfortable with each other on stage.

Shavers and his Vanna White-wannabe co-host Gillian Van Ness (Marissa Buchheit) trade playful banter throughout the performance, but are at their best when singing. Christine Laitta’s Grace is a joy to watch as a gray-haired, widowed contestant who has been left alone with apparently only episodes of Game On to keep her company. The audience members also add an extra element of fun to the script, causing the actors to improv along the way.

But Connor McCanlus steals the show as Felix, suffering throughout the performance after finding himself a contestant alongside his ex-girlfriend Natalie (Josey Miller), who he hadn’t seen since their breakup five years earlier. Natalie is spontaneous; Felix takes so long to make decisions that others make them for him. How they play the game of life is played out on stage through how they play the game show.


McCanlus’ anxiety attacks on stage were so convincing, they gave me anxiety. He’s Pittsburgh’s own David Cross, a natural comedian with similar quirks to the Arrested Development actor; he doesn’t need to try too hard to be funny, he just is.


The show continues through Sun., Jan. 27. Pro tip: Buy tickets ahead of time and get there early. The Greer Cabaret Theater has table seating and includes a decent food and drink menu for partaking before the show begins.