The work relates the playwright’s journey to find foster siblings 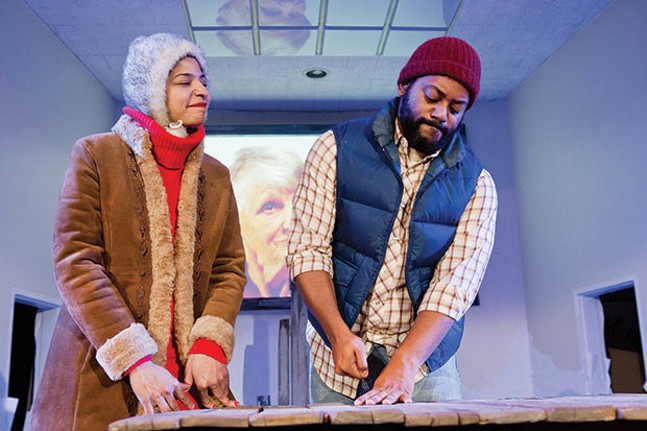 Two years in the making, Gab Cody’s multimedia Inside Passage, as presented by Quantum Theatre, is both epic and intimate, smashing the fourth wall and coloring outside the lines.

This autobiographical adventure defies easy description. Director Sam Turich and Cody have worked together on “immersive theater” (most recently in Bricolage’s DODO), and incorporate that interactive sensibility into Passage, but the audience gets to stay seated. Six actors — three women, three men — all play Cody at times, plus other characters both male and female, and two very dexterous bears.

In what Cody terms “33 acts,” each one suitably titled, Passage relates the playwright’s journey to find the foster sister and brother who shared several years of childhood in Alaska. Complicating factors start with the 40-year gap between the last time all three were together as a family. That the foster siblings were Native Alaskan (Tlingit, pronounced Klin-kit) explains part of that gap, eventually. More important is the celebration of Tlingit culture specifically, and respect for Native cultures generally.

Passage winds through “then, now and also later,” as the program notes, from early memories to speculative scenarios of how “Cody” (the character played by everyone in turn) will succeed in finding and interacting with her lost siblings. A bit of preachiness about white Americans’ attitudes toward indigenous populations is leavened by the fast pace, insistent humor and genuine geniality.

Despite Cody’s documentary approach, Passage does perpetuate the fishy misconception about the eating habits of bears, who are actually omnivores. Indeed, an Alaskan bear of my acquaintance much preferred crisp romaine lettuce to fresh salmon.

There’s so much going on with Inside Passage that it can challenge an audience, but it’s well worth the undertaking. Comedy, reality and bears — really, what more could anyone ask for in a play?