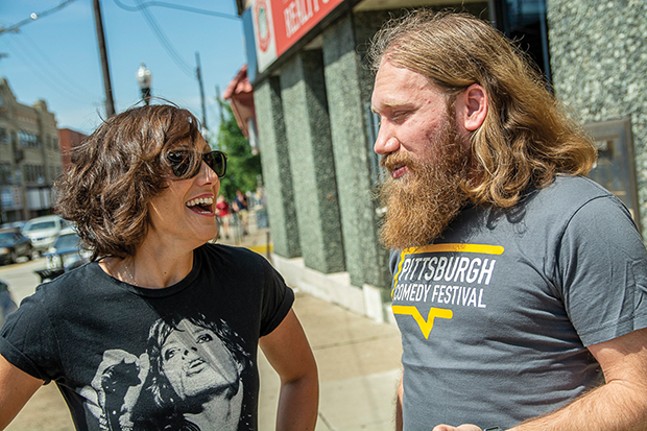 In its fifth year, the Pittsburgh Comedy Festival stretches across multiple venues throughout South Side from Aug. 22-26. Executive director Aaron Tarnow discussed this year’s event with comedian and City Paper featured contributor Gab Bonesso at Dobra Tea in Squirrel Hill.

You are the executive director of the Pittsburgh Comedy Festival … Umm, what does that mean?
It kind of means that I run the festival from a top level. So, it’s a lot of different stuff. Everything from figuring out headliners, negotiating time slots and I also stage manage the entire festival …

It sounds so old-timey vaudevillian.
It is a lot like that and that’s the way I approach most projects. Which is not the healthiest decision. [Laughs]

That’s why they pay you the big bucks!
[Laughs] Exactly. No. Actually, PCF is totally volunteer run. Every staff position, nobody gets paid. We pay our talent. We think that’s what deserves the money, right? So, every act on stage, and this has been true since Year 1 of the festival, every act gets paid.

Are most of the comedians in the festival from Pittsburgh?
The goal of the festival is to show off the Pittsburgh comedy scene. We have a scene that is really good compared to a lot of other small cities around the nation, but people didn’t really know about that — either in Pittsburgh or externally. So, the goal was always to bring people in from out of town, show them what a good time Pittsburgh is, to do comedy and then have them want to come back.

Because of that, we built the festival deliberately so that a very small percentage is Pittsburgh comics. The goal is to put on the best of the best in Pittsburgh as a minority of the festival and the majority are people from out of town who come through and meet us and meet each other. Everyone drinks in the same place and they all leave saying, “Pittsburgh’s a great place to do comedy. I want to come back.”

Who are you bringing in this year?
We’re doing something new this year, where in addition to our headliners, we are bringing in featured acts. So, I have six people to tell you about. On the improv side, we have The Cast from NYC as our main headliner. Our featured improv acts are long-time favorite from Baltimore, Casually Dope, and we have Limboland, which is a one-man musical improv show from NYC. On our standup side, the featured acts are: JC Coccoli — originally from Pittsburgh, but she now lives in Los Angeles. We have Todd Barry, a favorite of our generation, and our headliner this year is Marina Franklin.

Do you strive to have diversity in your festival?
I can’t say that we always did a great job from year one of the festival. This was started by mostly improvisors who didn’t know much about the standup world, and we had a lot to learn. But I can honestly say that in the last few years we have really tried to put on a lineup of comedy that more than one person can enjoy, and I say this as a cisgendered, straight, white man who has every privilege imaginable. But comedy by straight, white, cis men only appeals after a while to straight, white, cis men. I’m not saying there aren’t great straight, white, cis male comics, but what I am saying is that the whole point to comedy is to provide a new perspective.

Comedy is looking at society with a unique perspective, so how good could a festival be if it only provided the same societal perspective?

Testify! One last question. I am a born and raised suburbanite. I need you to tell me why I should leave my house, drive over a river, look for parking to come to your festival?
That is a great question. Okay, first of all, because this is a volunteer run, nonprofit festival, the cost is very minimal. You can get a five-day, full-access pass — meaning you can see every single show of the festival — for $50. Plus, it’s basically a crash course to learn about the Pittsburgh comedy scene. It’s an affordable smorgasbord of comedy.