Her Italian-American upbringing might have messed up the seasonings. 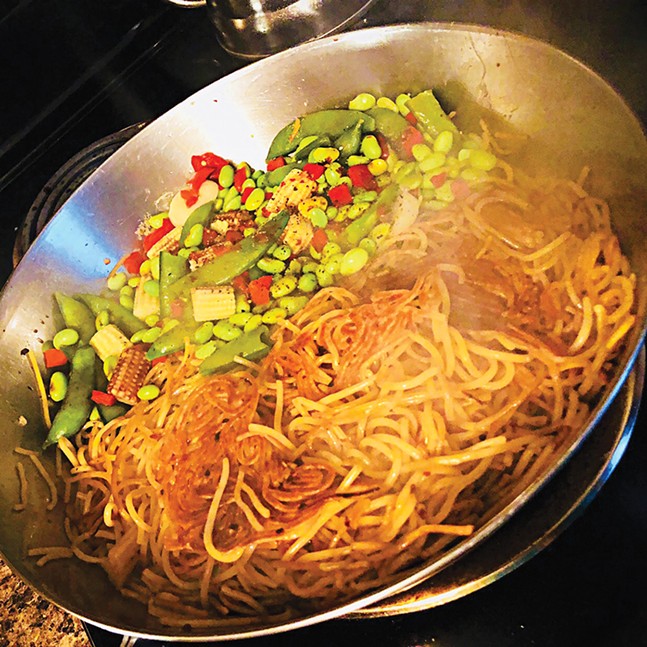 CP photo: Gab Bonesso
Double-Pan Fried Spaghetti
Rose Tea Café in Squirrel Hill is easily one of my favorite restaurants. My go-to item is pan-fried noodles, a crispy noodle dish that comes with any meat (or non-meat) of your choice. I always order it sans meat, with extra vegetables. I am a sucker for water chestnuts and pea pods, what can I say?

I wanted to make this dish at home, but with my own Italian-American spin.

I began by boiling a pot of water and making a half pound of spaghetti, which was then drained and set aside. Next, I placed three tablespoons of olive oil into a medium frying pan and turned the burner to hot. Once the oil heated, I tossed in about five to six cloves of garlic (I’m definitely not a vampire). As the garlic started to cook, I added in the vegetables. Choose any veggies you prefer (fresh or frozen). I went with a bag of Giant Eagle brand “Asian blend” from the frozen section. They contain the coveted water chestnuts and fun, smaller-sized corn — like from the movie Big with Tom Hanks.

While the veggies cooked, I turned the burner to medium and started to add seasonings: salt, pepper, hot pepper flakes, hot chili oil (found in the Asian aisle at Market District Giant Eagle), and soy sauce. I tossed the vegetables to spread the seasoning, placed a lid on the pan, and let the veggies cook.

Next, olive oil was heated in a different frying pan (this one slightly larger). Once hot, I took the drained spaghetti and placed it along the bottom of the pan. Almost like making a potato pancake but with spaghetti. Another large pan was placed atop the noodles. I pushed down so the pasta would get extra crispy and flat. Once it reached the desired crispness, I flipped the pasta with a large spatula and did the same to the other side of the pasta pancake. The vegetables were added to the same pan as the noodles to let everything stay warm and let the noodles crisp up a little more.

I finished the dish with a little Romano cheese and some pepper flakes.

It did not taste exactly like the noodles at Rose Tea Café. But I learned seasoning from Italians, so I did the best I could with the tools I’ve been given. I was very pleased with how crunchy the spaghetti was, but now I’m wondering if crispy spaghetti is causing my deceased Italian Grandmother to roll in her grave? Oh well, at least she’d be pleased that I cook like the good Italian girl I was raised to be.