McKees Rocks-born Coccoli “thinks about Mancini’s bread EVERY DAY OF MY DAMN LIFE.” 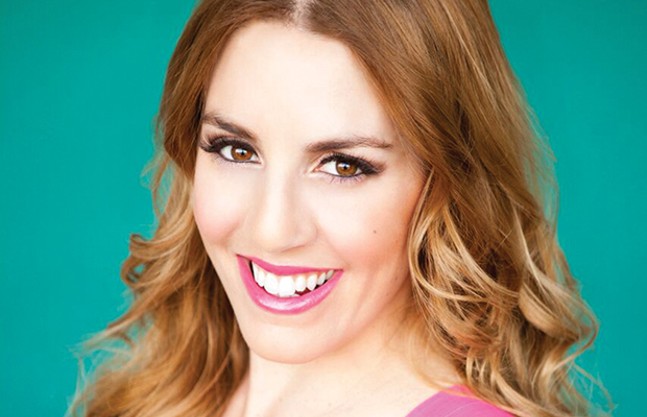 Born in McKees Rocks but based in California, comedian JC Coccoli has a homecoming as part of the Pittsburgh Comedy Festival. This is her interview with our Gab Bonesso.

Hey JC, thanks so much for doing this. I need to know, because there is a lot of confusion, are you a Pittsburgh Comic or a Los Angeles Comic?

I'm a beach-babe-surfer comedian based in Marina Del Rey CA with OG roots from da BURGH. Born and raised in McKees Rocks to a single badass mom, I moved to LA around 14 years ago, and I'll never stop bleeding that Black and Gold babyyyyy.

Nice. How long have you been doing stand-up?

My first-ever gig was down in college at the University of Central Florida about 15 years ago. I entered a stand-up competition that had all men doing mediocre jokes with little-to-no stage presence. I came in hot, and I like to say I won. (I have no proof that I did, but who needs facts nowadays). After that, my determination to the craft as a lucrative way to make a living began. So, I am at 10 years now.

Besides growing up Italian, what inspired you to go into comedy?

That's hilarious, because it is so true.  Italians on their own are funny as hell. You know, as a quick-witted woman from the Burgh, my sense of humor developed because of the women and men around me. I took who and what we are as Pittsburghers around the globe, and that showed me that there is something unique about my hometown and the people living in the city. My inspiration came from speaking up and talking about real things that were not so glamorous, and that was the golden ticket.

From stalking your FB page, I couldn’t help but notice that you met Gloria Steinem. Hello! Bucket list stuff. How did that happen?

Man, Gloria is a sharp shooter. Hands down an inspirational being that strips down your ego and educates you on activism and your part in it while on this planet. I began working with this nonprofit, Equality Now, in 2011, when I recognized my ambition for helping those that cannot help themselves. I channeled my work ethic into equal rights for women and girls, and never looked back. There are women and children all over the world that don't have the same freedoms that I experience, and when I heard these stories firsthand from women on the ground and grass-roots organizations making those stories public, I couldn't turn a blind eye. I began to talk about it. At dinner parties. On stage. Online. Things like: female genital mutilations that happen as "traditions" in many cities (even in the U.S.), where young girls clitoris are cut off to be "clean"  for men (as if girls are dirty, STFU); trafficking, where children are sold off in front of our faces (sometimes being transferred in front of all of us at airports, so keep an eye out) to be sex slaves for buyers; and child marriages, where young girls at the ages of 11 or 12 are married off to 60- or 70-year-old disgusting men, "legally" to be raped for the rest of their lives. So, Gloria had her hand in this all her life, and through my work with Equality Now, I have meetings with her and her team on how we can use our voices to put an end to this behavior by going in and using the law to make changes and hold the governments accountable to bring justice. Pretty dope, right? #Sheroes.

I think you both are #SHEROES. I first met you last spring, and I knew I recognized your last name. I just found out that you’re related to one of my best friends from McKees Rocks. I need to know how you survive in L.A. without Mancini’s bread? Or does your family ship it to you?

Ha! Well it's a pretty simple answer, I think about Mancini’s bread EVERY DAY OF MY DAMN LIFE. If I could make that bakery smell into a perfume, I would. In fact, maybe I will and sell it exclusively through City Paper.  Plus, my second job, growing up as a young teenager in Pittsburgh, was being a food runner and a waitress at Primanti Bros. —   so, as you could imagine, when I left all I could think about was French fries on sandwiches. The fact of the matter is, nowadays I eat really clean. (I would like to blame it on the food in Pittsburgh, but it’s a combination of that, genetics, and the cocaine I did in 2014; I have since stopped.) Growing up in the Burgh as an Italian/Russian, I wasn't really educated on the power of nutrition and how it can fuel your body for the good. I mean, I had pierogis for breakfast, for goodness sakes.

Though I have been in remission for a long time, my body has a thing called Crohn's disease and psoriasis. Both are autoimmune. So, to keep myself in top-notch shape with the utmost amount of energy for the job I do, I focus on cooking with not-so-traditional things that are better and honestly tastier than easily accessible foods that the United States provides for its people. Items like: quinoa, vegetables, gluten-free breads, pressed juices, squash, pumpkins; no red meat, no bleached flour, and no spicy stuff — since it is no longer a friend to my body. (Sorry if your boners are gone, guys). But when I come home … YOU BETTER BELIEVE I CHEAT. (Fun facts: Derek Jeter has Crohn's, and Kim [Kardashian] has psoriasis, so it's chill. lol)

Oh, my God! You should open up the first organic juice bar in da Rocks. What’s the one thing you want City Paper readers to know about your comedy?

You are going to cry-laugh, the "hurt-your-stomach kind."