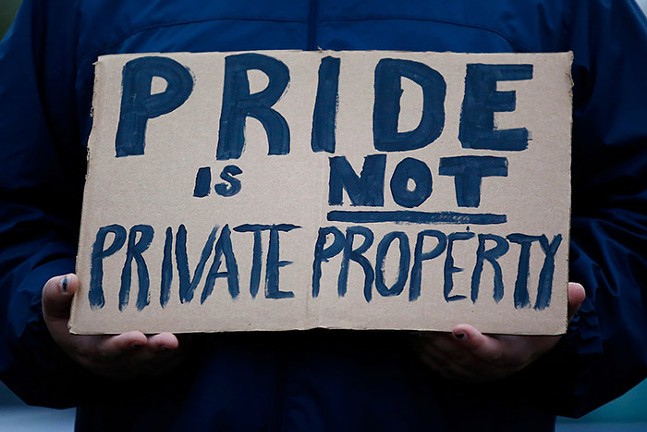 CP Photo: Jared Wickerham
Protest sign held up outside of the Persad Center in Lawrenceville on Fri., Oct. 22, 2021
Last August, the Delta Foundation of Pittsburgh voted to dissolve, citing financial difficulties and problems staying afloat after the cancellation of its Pittsburgh Pride parade and festival due to the pandemic. It was the end of a fairly long and controversial tenure for the LGBTQ nonprofit organization, which was mostly known for organizing the city’s largest annual Pride events.

Or, at least, that is what everyone thought.

About a year later, the U.S. Patent and Trademark Office released an official notice of publication, alerting many in Pittsburgh to the fact that Delta had originally filed a request on Sept. 2, 2020 — a month after they announced they were dissolving — asking to trademark the terms “Pittsburgh Pride” and “Pittsburgh PrideFest.”

The news confused many in Pittsburgh’s LGBTQ community and led some to ask: Why would a dissolved organization seek to make this move?

Now, two former Delta board members are crying foul, believing Delta’s current president and board chair — who replaced a former, and controversial, leader — is orchestrating a transfer of power to another LGBTQ organization. They are alleging financial impropriety against the Delta Foundation, including the organization’s strange ties to a jet ski rental company, and a financial audit that the accounting firm listed says it never completed.

These two former board members, who now run a local LGBTQ-focused publication, have decided to challenge Delta’s trademark request, and are encouraging others in the community to do the same. The trademark filing even led to a protest against the Persad Center, a local LGBTQ service organization currently run by Marty Healey, who is also the head of the board at Delta.

Jim Sheppard is a former board member of Delta and served as interim president shortly before the board voted to dissolve. He believes that Healey is trying to merge Delta and Persad as a way to take over Pride and other large LGBTQ events. Sheppard, along with former Delta treasurer Jeff Freedman, have charged that illicit financial dealings are behind this.

“Why would [Healey] want to do it? Because [Healey] wants to be king of the hill of the Pittsburgh LGBTQ community,” says Sheppard. “His idea is to merge all these groups into a conglomerate.”

But prosecutors who were tasked with looking into Delta’s financials in 2020 say that nothing illegal occurred. And Healey says Delta is still dissolving, despite the trademark request, and that the process just takes time. He denies any claims that he or Persad is trying to take over where Delta left off, or that Persad has any interest in running a big Pride march and festival.

This latest chapter in Delta’s tumultuous recent history signifies the staying power of some long-festering disagreements between members of Pittsburgh’s LGBTQ community. It also begs the question: What is the future of Pride celebrations in Pittsburgh?

Pride celebrations in Pittsburgh started off relatively small. In the 1970s, Pittsburgh Pride marches highlighted LGBTQ job discriminations, police harassment, and city legislations, according to the Pitt News. In the 1990s, they mostly consisted of a small march through Shadyside, typically moving down Ellsworth Avenue and the LGBTQ-friendly businesses that were concentrated near the corner of Maryland Avenue. The intersection now boasts a LGBTQ-focused public art project marking its historical significance.

According to its Facebook page, the Delta Foundation was originally incorporated in 1996 as a spin-off of the Lambda Foundation, a fundraising group that distributed funds to LGBTQ groups and causes throughout the region. Delta’s first mission as an organization was to focus on “uniting and fostering good fellowship and social interaction among LGBT residents in the metropolitan Pittsburgh area.” And, initially, Delta wasn’t laser focused on Pride celebrations.

Then in 2006, a new group of LGBTQ business owners and residents “came together with the idea of energizing Pittsburgh’s social scene and helping the community financially,” according to Delta’s Facebook page. Delta ceded leadership to this group, and the organization shifted to organizing large events, fundraisers, picnics, and other projects.

Pride events grew exponentially in size in Pittsburgh since Delta’s push in the mid-aughts. Concerts featured big-name acts, corporate sponsorships came pouring in, and the festival eventually took over an entire weekend.

But this growth didn’t come without controversy. In 2015, Delta faced criticism for booking rapper Iggy Azalea, who had a history of racist and homophobic statements. Azalea canceled and was replaced, but the controversy led to new organizations hosting different Pride events, held on the same day, to offer an alternative to Delta’s events. That divergence continued for a few years after 2015, with outspoken criticism of Delta’s Pride events being overly “corporate” and rainbow-washing by including sponsors that had given to anti-LGBTQ politicians, as well as not being inclusive enough to queer and trans people of color.

This has led to a handful of groups throwing their own Pride events, including Roots Pride, Trans YOUniting’s Pittsburgh Pride Revolution March, and others. All the events celebrate Pride month, meant to commemorate the 1969 Stonewall Riots protesting police violence against LGBTQ people, but with their own specific terms and with their own specific messaging.

In 2019, The Daily Show even featured a segment showing the polarizing differences between People’s Pride, led by Pittsburgh Black trans group SisTers PGH, and Delta’s corporation-heavy Pittsburgh Pride Equality March. With quarrels between LGBTQ groups and Delta — as well as between other non-Delta LGBTQ groups — it's unclear how united Pride events in Pittsburgh will be going forward.

Adding to Delta’s troubles is that longtime former leader Gary Van Horn became embroiled in his own personal scandal. In December 2019, Van Horn was charged with impersonating a police officer. He resigned a month later. Eventually, he was approved for an Accelerated Rehabilitative Disposition program in relation to the charges. ARD is a program for first-time offenders that offers expungement.

Sheppard served as interim president after Van Horn resigned, and he, along with former Delta treasurer Freedman, now run the local online LGBTQ publication QBurgh. Sheppard says that both he and Freedman started looking into Delta’s books in December 2019, and engaged with a local law firm on an internal investigation.

QBurgh has been critical of Delta’s attempt to trademark the Pittsburgh Pride terms, and in September, received an extension to challenge Delta’s trademark after Freedman said he paid a lawyer $650 to file a request.

Still, despite their opposition, some in the community believe Sheppard and Freedman have benefited from their association with Delta. Both Sheppard and Freedman deny rumors that their former connection to the organization aided them financially in creating QBurgh, as they both hold full-time jobs outside of working for the publication. Sheppard says rumors they used Delta’s computer equipment or mailing lists are untrue, and Freedman says he has contributed the vast majority of the start-up funds for QBurgh out of his own personal finances.

The pair's allegations against Delta include the organization’s ties to a jet ski rental company called “Thrill Water Sports LLC.” The company had several jet skis, two boats, and a trailer, and a copy of a bank loan application provided to Pittsburgh City Paper by Sheppard and Freedman shows that Van Horn listed himself and Delta Foundation as co-borrowers.

Sheppard and Freedman believe Thrill Water Sports was used for personal enrichment for Delta staff and others, and that, along with Van Horn’s arrest and resignation, these occurrences are the motivation behind the potential merger, since Delta’s brand has been so badly damaged.

Dena Stanley, head of local trans nonprofit Trans YOUnititing, says Delta’s name “was tarnishing to the communities,” and that is why she believes the organizations wanted to merge and have Persad run Pride, since Persad has “a better name in the communities.”

However, a financial report was sent by Delta to the Allegheny County District Attorney’s office in August 2020. District Attorney spokesperson Mike Manko told CP their investigation into Delta's financials determined that everything was above board.

“With respect to the financial information that was given to us by the board members, our office did a thorough review of that information and we determined that all transactions were legitimate and there was nothing in that material that rose to the level of criminal activity,” says Manko. 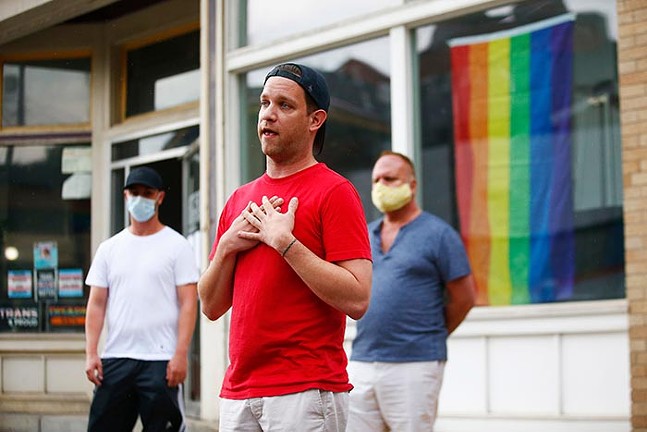 Healey, who is the current president of Persad and also serves as the volunteer board president for Delta, denies all allegations about potential mergers. He says that Delta is still dissolving, and that with nonprofits, that process can take well over a year.

The Pennsylvania Attorney General is tasked with overseeing dissolving nonprofits, and when asked about the progress of Delta’s dissolving and questions about investigations into potential financial misdealings, the office said they “can neither confirm nor deny the existence of any investigation.”

Persad is an organization focused on providing health services to LGBTQ in the greater Pittsburgh area. Jay Yoder served as the Director of Development at Persad up throughout 2019, and says the therapists at Persad are doing really good work.

But Yoder adds that both Van Horn and former Delta staffer Christine Bryan, Delta’s only paid employee, were brought into meetings at Persad in 2019, and that Healey “was very keen on collaborating with Delta.” Yoder says they were also encouraged to build their relationship with Bryan and Van Horn. Bryan is now on staff at Persad.

Healey acknowledges there were some talks prior to 2020 about how Persad might be able to help in Pride efforts, but says those discussions didn’t lead to anything and have ended.

“To repeat again, Persad’s mission is mental health,” says Healey. “Persad has no interest in owning or managing any Pride festival or march. It is not the mission of Persad.”

Healey says that Delta's lawyers encouraged the nonprofit to protect any potential intellectual property before the dissolution is complete, which is why the organization filed the trademark requests. He says that Delta does not plan on using the trademark if it is procured, and that it “can be used by anyone” if Delta ends up owning it.

The U.S. Patent and Trademark Office’s hearing for Delta’s patent filing has been rescheduled for Dec. 22. Trans YOUniting has created an online petition to “Stop the trademarking of Pittsburgh Pride.” As of publication, 1,822 have signed.

Delta has also been accused of not refunding vendors and entertainment for their canceled 2020 Pride event. Healey says Delta is still addressing that as the process of dissolving continues.

CP Photo: Jared Wickerham
Dena Stanley, head of Trans YOUniting, is shown speaking on a livestream during a protest outside of the Persad Center on Fri., Oct. 22.

As for the allegations about financial misdealings, Healey points to the DA’s absolvement and says that “every document, both computers that were used, every finding, every audit, and everything was sent to the District Attorney’s office.” He says the office performed an extensive investigation that went back many years, and Delta was always cooperative.

Healey said he has been leading boards for the last 20 years and that 99% of people who are engaged in LGBTQ organizing are, like him, involved as mostly volunteers. He understands that there are differences in opinion on how things should be run, but believes trying to work out those issues is healthy.

However, the differences still appear to be strong enough to drive wedges. Former Persad workers held a protest against the organization on Oct. 25, with groups like Trans YOUniting, who have been very vocal critics of Delta, in attendance. Attendees like Dryce Mazikeen said Persad management was anti-union, and voiced other accusations about the group being overly entangled with Delta.

When asked about the DA’s statement saying that the investigation of Delta showed no illegal activity, Sheppard says he is still wary of Delta’s next moves.

“If it is not to the level of criminality,” he says, “it is certainly unethical.”A&E Editor Amanda Waltz contributed to this story.