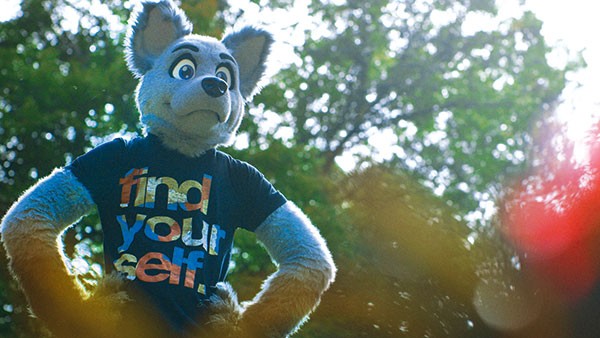 Photo by John Pope
A furry in the wild
Fursonas, a new documentary from Pittsburgh-based director Dominic Rodriguez, delves into the semi-secret world of furries, or humans who feel kinship with anthropomorphic animals. Locally, the furries are well known for the annual Anthrocon convention (this year, June 30-July 3), which fills Downtown’s streets with foxes, wolves, dragons and more (that is, folks in full “fur suits”).

Rodriguez, himself a furry, interviews a number of participants, who explain their varying attractions to furrydom. Some interviewees are “out” as humans, while others speak from within their suits. They discuss the power of “transforming” into an animal; the embrace of a community where they can be themselves; and the ongoing stigmas attached by outsiders. Chief among these seems to be the obsession among furries that outsiders equate furrydom with freaky sex. Furries in the film counter this prevailing myth with responses ranging from “no way” to “sure,” establishing that as with any group of people, there is no one answer.

But some people, like Anthrocon’s PR maven Uncle Kage, seem committed to presenting a media-friendly version of furries to the world. And this tension between the public and private side of furrydom offers some provocative material. So too does the suggestion of a hierarchy, where commitment might be measured by an expensive, elaborate suit, or an adherence to suggested guidelines. But even dressed as a fox or a raccoon, people are people, in all their messy, heartwarming and infuriating glory.

Rodriguez will do a Q&A after the July 1 screening. Starts Fri., July 1. Harris Theater.