Furries and Pittsburgh: a timeline 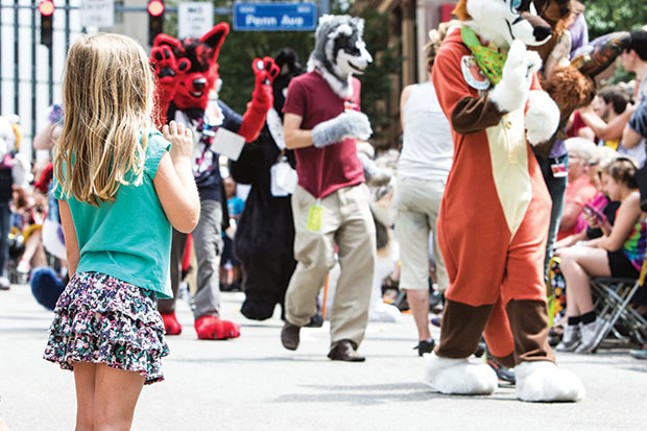 Ever wondered when Pittsburgh — a football town with a drinking problem, a steel town-turned-medical/tech hub, a city of bridges and champions— became the furry-friendliest spot in this American Land?

We did, too. So, let’s look back upon Anthrocon becoming as big a part of our summer routine as fireworks.

After seven years in and around Philadelphia, the furries figured out what everybody else in Pennsylvania had long known: southwest is where it’s at. David L. Lawrence Convention Center staged Anthrocon for the first time in 2006, drawing 2,489 attendees from June 15-18. We weren’t sure what to make of these “human-like animal characters,” but they seemed cool.

A year after taking to our streets, the furries brought back their Anthrocon convention in 2007. Attendance increased by 360, so something must have gone well the previous summer. This con occurred from July 5-8, giving our furry friends a chance to see a Fourth of July Pittsburgh party proper.

Year three of Anthrocon-in-Pittsburgh set a then-record with 3,390 attendees. And while the number dipped by a couple of hundred the next year, 2010 brought over 4,000 furries to an Anthrocon for the first time. Attendance has grown each year since, nearing 7,000 for recent cons. Either the furries have unlocked the inner-anthropomorphic in most Pittsburghers, or they just really dig all these bike lanes.

Furry at the Bat

Baseball was a thematic focus at Anthrocon last summer. We’re guessing that in Year 12 of their relationship with Pittsburgh, the furries sensed Pittsburghers needed some sort of national pastime pick-me-up. (Look, we’re not saying the furries would take a series from the Pirates, but we wouldn’t be shocked if they did win a game.)

This week’s Anthrocon at the convention center is the 13th consecutive held in Pittsburgh. That’s one Anthrocon for every season Sidney Crosby has spent with the Penguins. And at this point, we’re pretty sure only Sid is more beloved than the furries. Or maybe it’s vice versa? The party runs Thursday-Sunday. By now, we all know the drill.