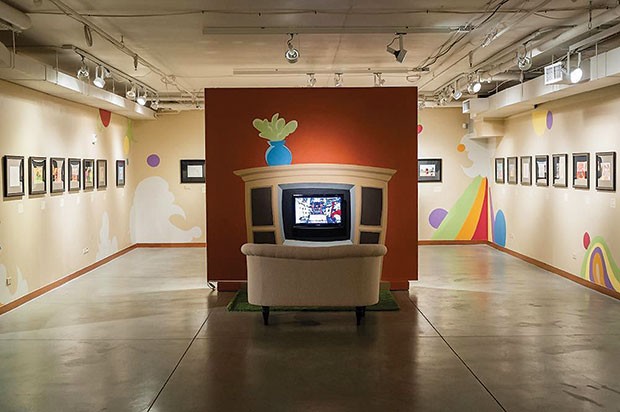 Pamela Thompson and Loreen Williamson have examined their collections of more than 300 items connected to cartoons presenting positive depictions of black people and selected several dozen for Funky Turns 40: Black Character Revolution. This touring exhibition was originally seen online under the auspices of Thompson’s Museum of Uncut Funk. Now, after a 2012 stint at the ToonSeum, it returns to Pittsburgh courtesy of the August Wilson Center.

On view are sketches, cels and videos from the animation that finally depicted black people as people, beginning with the Peter Jones character from The Hardy Boys TV series (1969), and Josie and the Pussycats’ Valerie Baum (x1970).

The Jackson Five (role models whose behavior could not be faulted, at the time) are here as real-life celebrities reinvented as cartoons, as are The Harlem Globetrotters (unsurprisingly), Flip Wilson (same) and Muhammad Ali (maybe not unsurprisingly). Fictional characters in the room include those found in Fang Face, Star Trek and Hong Kong Phooey, as well as black-oriented cartoons like Fat Albert and The Cosby Kids (what up, Mushmouth). The swag that these programs inspired shows up in board games and lunch boxes, and there’s even a comfy couch in a spare recreation of a living room where you can park yourself and watch a cartoon or two.

If we look at just what’s shown from the 1970s, it’s a lovefest celebrating Black America through vivid animation, accompanied by a killer soundtrack. But the exhibition also includes a video demonstrating, quite painfully, that this was not always the case. From the earliest days of animated film, just up to when the works in this collection were created, black people were, in some instances, depicted as something barely human; in others, as less than. From identified clowns like the Depression era’s “Bosko” to identical mammies big, brash and belittled, animation was not kind to black Americans.

Recently, Jay-Z took us back to this time with “The Story of O.J.,” thoroughly owning that traditional animation style in the most thrillingly incendiary music video since, well, Beyoncé’s “Formation.” But although we can join the shout for glory in the 1970s while considering the earlier racism, figuring out exactly where we are now is not so easy.