Fugazi’s Brendan Canty and Joe Lally reunite in The Messthetics

The cerebral stuff might make the music majors perk up, but the final product is pure fun 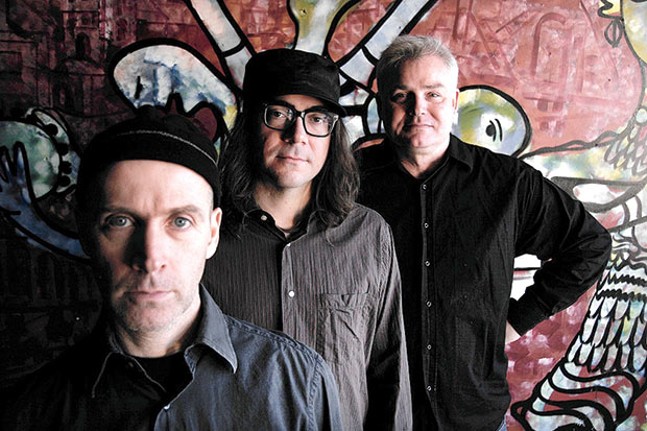 Brendan Canty is not only an incredible drummer, multi-instrumentalist and film scorer, the dude can also turn a hell of a phrase.

For Fugazi fans, hearing Lally and Canty reunited in The Messthetics is pretty glorious, too. Fugazi went into indefinite hiatus in 2003, and while Canty kept busy with film scoring and other bands in the time since, hearing the chemistry reignited between these two feels like eavesdropping on a long-overdue reunion between pals — which it pretty much is.

The Messthetics was born out of sessions following Lally's return to Washington D.C. after nearly a decade living in Rome. He'd been composing jazzy, experimental tracks with guitarists in Italy, and started re-working them with Canty once back in the States. Pirog, a crazy-versatile guitarist and veteran of experimental music, seemed like a perfect fit to round out the trio.

The result is an incredibly self-assured debut record, nine instrumental tracks of wild-eyed improvisation anchored by Lally and Canty's deft, stubborn rhythm section. "Serpent Tongue," the first single and first song they wrote as a trio, builds on a deceptively simple bassline with an odd time signature (three meters of five, then a meter of six, if you're curious). The quirky meter stuff was Pirog's idea, and despite being kind of a pain in the ass ("drummer torture"), the song emerged as something of a guiding principle for how and what the band would write from then on.

"It woke a bunch of muscles up that had been lying dormant for a while," Canty says.

Odd signatures notwithstanding, the album is not math homework. The cerebral stuff might make the music majors perk up, but the final product is pure fun (think Delicate Steve or an instrumental Rush). Canty and Lally might have a 30-year head start chemistry-wise, but Pirog weirdly fits right in. The album is fun to listen to because they actually had fun making it.

"The whole goal is to get up there on stage and try to listen to each other and communicate to each other and work together to make it happen on stage," says Canty. "In that way, it’s really similar to Fugazi. It’s really a great matchup for Joe and me to be playing with [Pirog]. That’s obviously what we need, you know? It’s been a complete blast."