Stylistically, these are updated Pop art themes given a Conceptual art treatment. 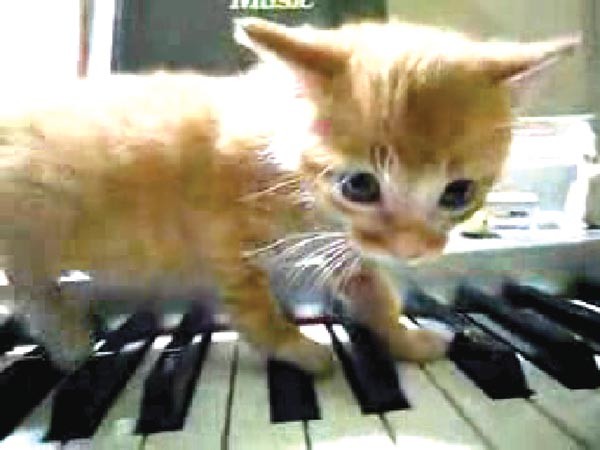 His wry verbal commentary was exhibited during the opening-night "Selected Single Channel Videos" presentation. During that performance-lecture we learned that: He is an obsessive archivist (he may have the only known copy of the 2006 Iranian Women's Police Academy maneuvers, with its burka-clad rappellers, twirling nunchucks, etc.); he was in a tweener punk band; and he mucks through a lot of YouTube and other Internet crap to come up with his source material. The Brooklyn-based Arcangel was not the first artist to mine and modify the endlessly expanding riches of cyberspace, but he got there early. Devoid of a recognizable style, his basic approach utilizes readymade digital technology and repurposes pre-existing digital files, mostly from the Internet.

The bulk of the exhibit, curated by the Carnegie Museum of Art's Tina Kukielski, is located in the Carnegie's Forum Gallery, and it manages to be both stylish and unpretentious, in a calculated way. Wallpapered with Arcangel's undecorative "Infinite Fill" (2004), the main event is a row of six sports-bar-sized HDTVs, each perched atop the manufacturer's carton. Five monitors are silent or offer headphones; the one television playing out loud fills the room with electronic noises that fall into a kind of pattern. This audio is part of "Data Diaries" (2003), in which emails, downloads, etc. are played as a video file, generating geometric pixelation patterns that mutate; the effect can be entrancing or irritating. Offering relief at one end of the row of televisions is "VIZIO XVT553SV LED LCD HDTV Screen Burn" (2012) — displaying an unchanging museum label for this piece which will eventually wreck the television. At the other end is the placid "Super Mario Clouds" (2002), in which the Super Mario Bros. video game has been altered so that only slowly scrolling clouds remain, a conceit whose meaning rests upon familiarity with what's been suppressed.

Arcangel is attracted to what doesn't quite make sense, and he messes with stuff in a way that ends up being generative of new meaning and some unexpected insight, though it doesn't usually seem as if he were aiming for a narrow message. For "Untitled Translation Exercise" (2006), Richard Linklater's coming-of-age stoner flick Dazed and Confused was redubbed in India-accented English, dragging in — not dictating — associations to outsourcing, Hollywood's global reach and the often outrageous quality of movie dialogue. The labor-intensive "Drei Klavierstucke op. 11" (2009) pairs Arnold Schoenberg's 12-tone composition (using all keys on a piano instead of a conventional scale) with cat-and-piano meme video clips to create a mashup parodying the dilettante's contention that my-cat-could-play-that. In the process, the unwitting audience is introduced to Schoenberg's high-culture music. Anchoring the gallery are vitrines of ephemera, memorabilia and incunabula.

Slightly off-sited, in the museum's Scaife Galleries, is "Sweet 16" (2006), in which nearly identical clips (one slightly shorter than the other) from a Guns N' Roses music video start in sync, shift out of phase, and gradually work their way back into sync. The visual component is surprisingly satisfying, and the repeating, subtly morphing audio could pass for 20th-century minimalist music. This is Arcangel at his best: an elegantly simple, graspable idea with an unfolding depth as we ruminate on it and make external associations, moved along with a dose of entertainment.

An adjunct to the exhibit is presented in the adjoining Carnegie Library, where Arcangel has made available for listening eight milk crates full of underground dance records that he purchased from a techno DJ. This represents the kind of contradiction that attracts Arcangel, namely, future-obsessed music in a presumably obsolete analog form, while the act of "sharing" conjures a basis of internet social connection.

Arcangel's an artist with a winning mix of computer-programming skills, musical training, hacker sensibility, sense of humor and tolerance for viewing YouTube videos. Many of the works in the exhibit have a semi-random feeling of things that were happened upon, suggested possibilities and were carefully tweaked. Stylistically, these are updated Pop art themes given a Conceptual art treatment. Arcangel modifies his subject matter, which some might find annoying, and transforms it into entertainment with an intellectual twist, with sometimes surprising implications regarding the flow of images and information.