From Radio Raheem to Eric Garner and beyond, will this country ever ‘Do the Right Thing’ about black men dying at the hands of police | Opinion | Pittsburgh | Pittsburgh City Paper

From Radio Raheem to Eric Garner and beyond, will this country ever ‘Do the Right Thing’ about black men dying at the hands of police

“Once I saw that film, my eyes were opened to the shit-storm that an unequal society can rain down on certain segments of our population.” 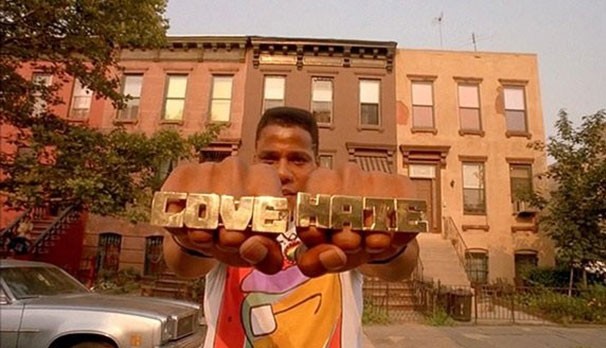 Screencap from "Do the Right Thing"
Bill Nunn as Radio Raheem

The first time I discovered that police treated black men differently than white men was when New York City police officers killed “Radio Raheem” at the end of Spike Lee’s 1989 film Do the Right Thing.

Now, to be honest, I didn’t come to that realization at the time. But as a high school senior from a small town with a tiny African-American population, seeing that movie made me realize that the world wasn’t as fair as I thought it was, and not all police were like Officer Jack Gallagher, who oversaw the schools’ street-safety patrols. We learned about the Civil War and the Civil Rights movement, but in my small corner of the world everything was pretty fair and balanced.

But looking back, once I saw that film my eyes were opened to the shit-storm that an unequal society can rain down on certain segments of our population. It wasn’t until Sun., Sept. 25, when I woke to learn that actor Bill Nunn III, the Pittsburgh native who played Raheem, had died the night before after a battle with leukemia, that I realized the impact that role and that film had in shaping my political and social-justice ideologies.

For those who don’t know, and I honestly pity you if you haven’t seen it, Do the Right Thing is set in Brooklyn’s Bed-Stuy neighborhood on the hottest day of the year. The film centers on a pizzeria owned by an Italian-American and his sons. Mookie, a guy from the neighborhood, works there delivering pizza. The film masterfully tells the story of this neighborhood, the people in it and their relationships. By the end, though, there is a racially charged fight that ends with Raheem killed by a police officer’s chokehold. In the midst of the chaos, Mookie throws a trash can through the shop window, a riot breaks out and the shop burns to the ground.

Of course, black men were unjustly killed or injured or beaten by police prior to 1989. In fact, that film was partly inspired by the death of Michael Stewart, a graffiti artist who was beaten to death while in custody (the officers were charged and acquitted). But it wasn’t until I saw the film that my eyes were opened, and since then it’s been a steady stream of victims, blue uniforms, punches, chokeholds and bullets:

Too many to mention; too many to be coincidental; too many. I’ve often been asked by people I know and readers of this paper how I can think that these shootings weren’t justified. I often ask how they could think they were. I grew up learning that you always respect the police; and in my small town I did.

That’s what Do the Right Thing did for me. It changed my worldview, or rather it expanded it. Watching Nunn’s powerful performance as Radio Raheem having the life choked out of him, I started noticing that things weren’t right in the world.

In 2014, the 25th anniversary of the film, members of the cast were interviewed plenty about their roles in the movie. In an interview done shortly after Garner was choked to death by New York City police, Nunn was asked by ABC News about the similarities between the movie and the real-life event.

“[The Eric Garner case] is life imitating art,” Nunn said at the time. “First it was art imitating life and now it’s gone full circle, but the bottom line is we kind of did a thing about a moment in time that had happened. It wasn’t the first moment and it hasn’t been the last.”

These problems have continued, and I’m puzzled why more people haven’t had their eyes opened to what’s going on. My consciousness was raised by a film — a powerful and emotional film, but a film nonetheless. Folks today don’t need a movie, because this horror is playing out in real life seemingly every day in our country. Yet, there are still people who refuse to see or acknowledge that black men are dying needlessly. Instead they point fingers at protesters and rioters and are quick to chastise their actions. I don’t necessarily agree with destroying property and reacting violently to these incidents, but I understand it. The word “marginalized” doesn’t even begin to explain what’s happening to African-American males who find themselves in confrontations with police officers where men are being beaten, choked or shot and then go unavenged by the justice system. How is the public supposed to respond at this point?

In the film, Radio Raheem wore a huge gold ring on each hand; one said “love” and the other said “hate.” Nunn spoke of that in his 2014 interview.

“I still believe that love is stronger than hate,” he said. In other words, it’s time for us to do the right thing. Here’s hoping it’s not too late.