From George Takei to the criminalization of rap lyrics, and Azar Nafisi to the history of queer Pittsburgh, the inaugural Pittsburgh Humanities Festival ranges wide | Features | Pittsburgh | Pittsburgh City Paper

From George Takei to the criminalization of rap lyrics, and Azar Nafisi to the history of queer Pittsburgh, the inaugural Pittsburgh Humanities Festival ranges wide

"The humanities" are easy enough to define: They are "knowledge of humankind and its works," says David Shumway, head of Carnegie Mellon University's Humanities Center. Think: literature, academic disciplines like history, anthropology and philosophy, and even the life experience of everyday people.

"This is new and it's not easy new," says Organisak. After all, the Humanities Festival isn't splashy, like the giant rubber duck at the Trust's 2013 Festival of Firsts. Yet neither is it a mere series of podium lectures. Rather, it features nationally and internationally known theater artists, writers, poets, filmmakers and historians making presentations or in conversation with a moderator — and ultimately with the audience — on everything from indie cinema to the criminalization of rap lyrics, religious innovation in Pittsburgh, and the concept of "dignity." The fest's tagline is "Smart Talk About Stuff That Matters."

Bookending the four-day program are its biggest names, both at the Byham Theater: Azar Nafisi, author of the best-seller Reading Lolita in Tehran, speaks on "Humanities & The Future of Democracy" on March 26. And George Takei, actor and social-media Jedi, wraps things up March 29. 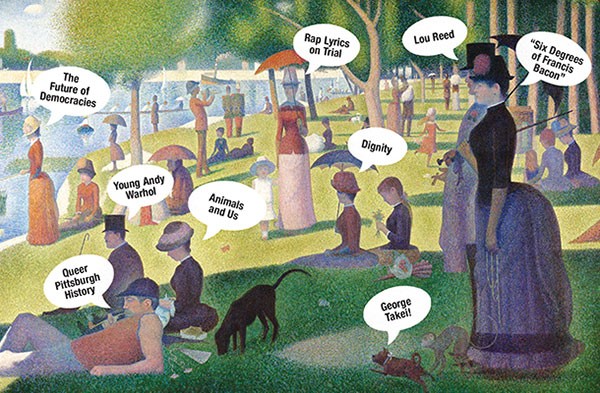 Shumway conceived the festival after hearing about the long-running Chicago Humanities Festival. Organisak was receptive, having noted the increasing popularity of post-show audience talk-backs and other supplementary programming at Pittsburgh Dance Council shows (which he programs) and other Trust events. "People come wanting more education, more conversation around what they're seeing," he says.

Moreover, the humanities fest "kind of fills a gap" in town, says Organisak, by acknowledging the increasingly blurry distinction between humanities and the arts.

The festival, in fact, includes a couple theatrical presentations. Playwright Robert Myers' Twilight Country, about a white woman and a black woman bonding over Dante's Inferno in 1948 North Carolina, will be performed by Broadway actors Kathleen Chalfant and Tonya Pinkins (March 27 and 28). And performance artist Cynthia Hopkins presents A Living Documentary, her musically driven new one-woman show about life as an artist in New York City (March 28). There's even a music component: VIA Music Festival's special March 28 show at Lawrenceville's Ballroom (above Round Corner Cantina), featuring artists from boundary-pushing Mexican music label N.A.A.F.I.

Organisak was intent on keeping festival tickets affordable: A festival pass of $20 ($10 for students) gets you into most sessions at Downtown's Trust Arts Education Center. Selected events (including Nafisi and Takei) are ticketed separately.

For most sessions, seating is limited to 85. So even if it sells out, the Pittsburgh Humanities Festival has a long way to go to catch Chicago's. Last fall, the Chicago Humanities Festival's three-week main season hosted more than 100 events and drew about 38,000 people. The 25-year-old CHF has events year-round, including a May performance festival for young audiences.

And indeed, along with the  Cultural Trust and CMU's Humanities Center, the Pittsburgh Humanities Festival is supported by groups including City of Asylum/Pittsburgh, The Andy Warhol Museum and the humanities arms of University of Pittsburgh and Penn State. Bahar says that securing such partners is "a great way to launch" its inaugural season.