“They hear that term ‘port’ and wonder when Kathy’s going to bring the boats in and which river she’s going to get them to stop in,” said Allegheny County Executive Rich Fitzgerald during a June 9 press conference announcing the name change.

The Port Authority branding had, as Fitzgerald notes, essentially persisted as a misnomer for most of the agency’s tenure. But this was not the case in the early days.

Port Authority was established by county council in 1957 on the back of a new state law allowing counties to “plan, acquire, construct, maintain and operate facilities and projects for the improvement and development of the port district.” Pittsburgh functioned as a major inland port during the industrial heights of the 1950s, and even today, millions of tons of coal and manufactured goods are shipped through Pittsburgh’s three rivers each year.

According to contemporary newspaper clippings, the Authority’s initial focus was on developing riverfront railroad and shipping property. But its scope quickly expanded, and within a year, the new agency was exploring the creation of a combination terminal for boats, trains, planes, and trucks. (Buses were noticeably absent.) 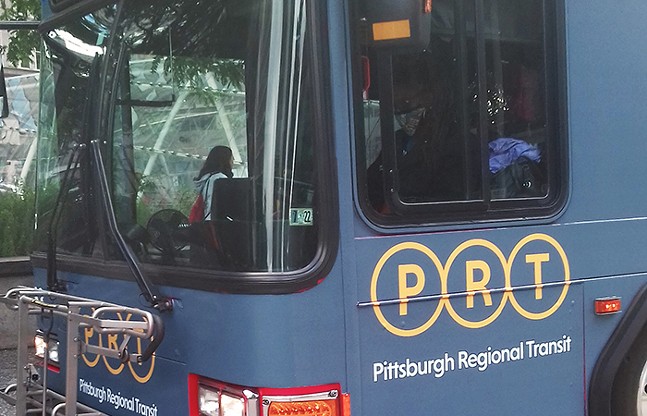 CP Photo: Jamie Wiggan
A redesigned Pittsburgh Regional Transit bus on display at a press conference announcing the company’s rebranding efforts on June 9, 2022
A feasibility study ultimately determined this ambitious vision would be cost-prohibitive, so council axed the plans in November 1958 before they got off the ground. Following this early failure, the authority quickly shifted focus to transit, hatching a plan to buy up the various privatized bus and streetcar services to consolidate them into a single seamless system.

Although they’ve essentially operated every bus route and light rail service in town since 1964, officials say the switch to Pittsburgh Regional Transit finally marks a fulfillment of that initial vision for a unified transit experience.

“[The rebranding] lets us have a unified product,” said Pittsburgh Regional Transit CEO Katharine Kelleman during the rebranding press conference. “So if I'm somebody trying to figure out, ‘How do I not drive myself?’, it's easy to see what those choices are, and it makes sense for me to make those connections.”

Achieving this will mean installing new signage for all 7000 bus stops and painting all regular buses with a uniform blue-and-yellow color scheme to prevent any misunderstandings caused by having red, green, blue, and yellow buses that don’t signify specific routes. Buses running on special routes like the East and West Busways will be given distinctive colors to help them stand out, according to PRT spokesperson Adam Brandolph.

Local transit activists say they welcome moves to streamline services and improve their ease of use but would rather see more investment in boosting services.

“Above all, riders want our transit agency to plan for more frequent and reliable service, taking more people to more destinations,” says a statement from local transit advocacy group Pittsburghers for Public Transit. “[R]iders need fare payment to be more affordable because we continue to pay some of the highest transit fare costs in the entire country, without any fare relief programs available for low-income residents.”

The group also notes that riders have “organized, marched, and testified for the Port Authority to fulfill these baseline needs around service and fares for years. If a marketing campaign is what the agency needs to catalyze these improvements, then we will welcome it.”

Some of these changes may be coming, but it’s not clear when.

Last fall, PRT adopted a 25-year plan to overhaul the region’s transit system. The plan outlines 18 possible projects including expanding the Martin Luther King Busway to Braddock, extending the light rail service to the North Hills, and establishing neighborhood routes to cut out unnecessary Downtown transfers. All the projects are dependent on yet-to-be-realized funding thresholds and have different assigned priorities for implementation.

Brandolph said the rebrand “is built into” the 25-year plan, which he said remains on course.

As the public transit agency looks to expand and rebrand, it does so against lingering headwinds from the pandemic, which shrank ridership to 50% below peak levels.

Kelleman remained upbeat about PRT’s future outlook while announcing the rebrand, saying the COVID-induced disruption offers another opportunity to reimagine the system’s best use of its resources.