While amusing, Will Gluck's film hasn't got the cojones to really subvert the rom-com genre 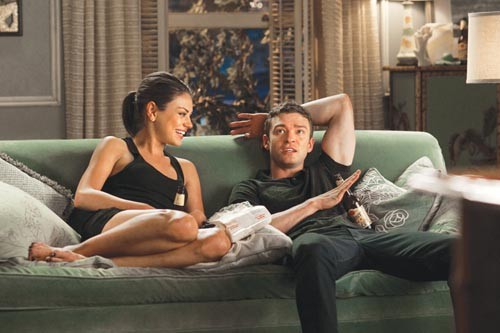 How could two people as adorable as Justin Timberlake and Mila Kunis not belong together? Well, Will Gluck's bouncy rom-com, Friends With Benefits, says: yes, they do, and no, they don't. The pair, who meet in adorable circumstances (more on that later) agree to be friends -- which they're great at -- and sex buddies (also good at), but not -- repeat NOT -- to become emotionally involved. Each has soured on l-o-v-e, and now wish "to be like George Clooney." (By which I took to mean: swingle, good-looking and dabbling in indie pics. Check and check.)

Friends takes plenty of good-natured pokes at rom-com tropes. (A number are acted out in a movie-within-the-movie featuring Jason Segel and Rashida Jones as star-crossed lovers.) When not complaining about Capt. Sully (there's a riff that won't have the same longevity as, say, Meg Ryan's lunch), Dylan (Timberlake) rails against the genre's manipulations, including the last-reel race-to-the-transportation-hub and the cheesy pop song that plays over the credits. Jamie (Kunis) agrees romantic love is waaay overrated, and thus does their friends-with-benefits adventure begin.

In the plus column, Friends is amusing without being too crass; sweet without being cloying; and very generous with its (discreet) nude scenes. The two stars are engaging and have an easy chemistry. No wacky best pals (hooray) --but two pros on board as parents: Richard Jenkins, as Dylan's dad and Patricia Clarkson, who plays Jamie's still-libertine mom. When Clarkson walks in on the couple sharing "benefits," she muses: "It's like the '70s in here!" (Playing without comment in the background of one scene is the 1969 film Bob & Carol & Ted & Alice, which was an early cinematic harbinger of how complicated "free love" can get.)

But as much as Friends enjoys sniping at formulaic rom-coms and having its light meta-text moments, it hasn't got the cojones to really subvert the genre. About 95 percent of the movie is wistful fantasy, from its hottie leads to not-in-my-world settings: California beach house, sleek Manhattan apartment, 1936 Chris Craft boat.

And so beneath the sparkly oh-so-modern slipcover is the predictable loveseat: a not-very-funny meet-cute that finds the lady in a ridiculous circumstance (in this case, atop a baggage carousel); the bonding moment in an unfailingly romantic place (private Manhattan rooftop); the bad dates with other people; the misunderstanding combined with the well-established character flaw that leads to a break-up; the post-break-up pining; and the ridiculous grand gesture that reunites the always-meant-to-be couple. Awwww. Plus, a healthy dose of the aforementioned crappy pop songs.