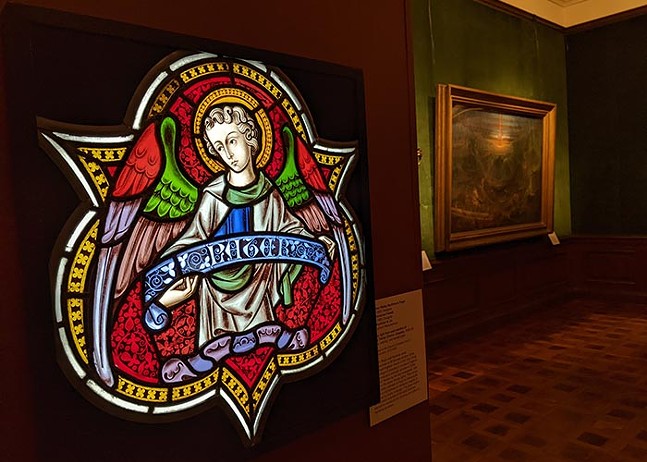 The show, on view through Jan. 30, 2022, examines how, across six decades from the 19th to 20th century, three generations of rebellious British artists and designers used their work to engage with and challenge the growing industrial revolution. They focused more on the fantastical or divine, favoring vivid, spectacular imagery and skilled craftsmanship over the grimy, dehumanizing onslaught of factory mass production and machinery.

Separated into distinct periods, the show traces from right before the Pre‐Raphaelite Brotherhood of the late-1840s to the Arts & Crafts Movement, which came to prominence at the turn of the century. Viewers can expect works by Gabriel Rossetti, William Holman Hunt, and John Everett Millais, whose harrowing depiction of Hamlet’s Ophelia has graced the walls of many a college dorm room.

On one hand, I’m perhaps judging Victorian Radicals too unfairly, as I compare it to the more precisely focused, and surprising run of shows Frick has done in the last few years. I more than respected the calculated risk of doing an entire exhibition on horses, which Frick did with A Sporting Vision in 2019, or dedicating its galleries to the art of fashion with not one, but two exhibits: the 2019 tribute to a movie star Katharine Hepburn: Dressed for Stage & Screen and Sporting Fashion: Outdoor Girls 1800 to 1960 in spring 2021. After blowing me away with these three bangers, maybe the museum was due for a flop.

And yet, Victorian Radicals is still far from a flop. How could I be so judgmental when here before me were some of the most exquisite, earnest paintings, stained glass works, and illustrations I had ever seen? The gallery also made for an intimate viewing experience, allowing for a close enough proximity to observe cracks in the paint, or fraying on the century-plus old textiles and clothing on display.

Organized by the American Federation of Arts and the Birmingham Museums Trust, the exhibition features more than 100 works from the collection of the city of Birmingham, England, including paintings, drawings, enamel, and stained glass. There are also more functional pieces, such as jewelry, vases, and decorative tiles, influenced by this era.

A press release boasts that many items in the collection have never been exhibited outside of the U.K.

Dawn R. Brean, chief curator and director of collections at The Frick Pittsburgh, summed up the show, saying, “These artists genuinely believed in the capacity of art as a force for social good. They rejected the prevailing thinking of the day and envisioned a better future by, somewhat surprisingly, looking to the pre-industrial past. They prized truth, nature, authenticity, and the handmade. Their search for beauty in an age of industry generated questions that remain as relevant today as they were then.”

Art lovers will recognize some of the most defining pieces of the Pre-Raphaelite movement, defined by its depictions of mythological and literary figures, vibrant colors, and dramatic scenery. Here we see Frederick Sandys’ portrayal of the tortured, jilted Medea clutching at the strings of red beads around her neck, and the Arthurian enchantress Morgan le Fay. The famous story of Beauty and the Beast plays out in a hauntingly detailed painting by John Dickson Batten, who produced illustrations for fairy and folk tales. This is a world of knights and kings, saints and sinners, and magic (there’s literally a painting called “The Wizard” by Edward Burne-Jones).
click to enlarge

CP Photo: Amanda Waltz
Victorian Radicals: From the Pre-Raphaelites to the Arts & Crafts Movement at Frick Art Museum
Here we see the intersection of visual art, poetry, religion, literature, and mythology writ large, and the romance, drama, melancholy, and now-problematic exoticism of it all. Everything is expressive, theatrical, and wonderfully big.

Amid all the dreamy escapism, however, are images more concerned with remembering the souls trod upon by the march of industrial progress. This is especially apparent in Millais’ “The Blind Girl” and Henry Wallis’ “The Stone Breaker,” the latter a direct comment on Victorian England’s abhorrent treatment of the poor, including an 1834 act that required any unemployed person to perform hard, dangerous labor.

What Victorian Radicals demonstrates more than anything is the role women played in this era of art. Images of women, both fictional and real, dominate the galleries, capturing viewers with their intense, immortal stares, plaintive gazes, or ethereal auras. While there are very few works by women on display, their influence looms large, as they clearly served as both muse and model (the legend goes that Keomi Gray, a Romani woman, sat for many of Sandys’ paintings).

While Victorian Radicals may not be the Frick’s most adventurous show, it still offers the privilege of being in the presence of some truly incredible works. Its passionate bucking of early capitalism should also resonate with modern audiences facing what’s being dubbed the “Great Resignation,” as American workers are now quitting en masse as a protest to what they see as unfair, harmful conditions.Victorian Radicals: From the Pre-Raphaelites to the Arts & Crafts Movement. Continues through Sat., Jan. 30, 2022. Frick Art Museum. 7227 Reynolds St., Point Breeze. $8-15. Free for members and kids 5 and under. thefrickpittsburgh.org