In June 2018, Jimmy Brown and Lyndsey Shumate, the duo behind Ease: Modern Comfort Cuisine, knew it was time for a change. The upscale joint, which had replaced Dunning’s Grill after its 30-year run in Regent Square, was struggling to win over the neighborhood. They had a choice: leave the area and their dream behind or dig their heels in, listen to the community, and try again.

A little over a year later, Ease, a spot that Shumate described as having a “cold, sterile, museum-like atmosphere,” was officially transformed into Frick Park Tavern, a restaurant that better reflected the neighborhood around it: warm, inviting, and familial.

There’s almost nothing left of Brown’s “modern comfort cuisine” on the current menu. They’re working to “bridge the gap” that has been left between Dunning’s and Ease; Brown and Shumate ditched dishes that fell in line with Ease’s cold atmosphere and replaced them with comforting but “elevated” tavern food. In addition to the menu redesign, Brown and Shumate have formed partnerships with local purveyors to provide their community with the best and freshest ingredients.

No dish showcased the tavern’s idea of “elevated” better than the bacon risotto; though historically a more sophisticated dish, the texture and flavors had the homey, familiar appeal of mac 'n' cheese. The rice was cooked perfectly, lush with cheese and cream. A touch of applewood smoked bacon balanced the strong black pepper and added a bit of a personality to the dish.

The thoughtful, unpretentious approach works for many of the dishes on the menu, though there were a few fumbles. Blue cheese was almost undetectable on fig and bleu tartlets that were drowned in a balsamic rich enough to make my mouth pucker. Hand-cut fries were valued for appearance rather than taste. Tacos were a strange addition to the American-focused bar menu (they were tasty, albeit a bit dry).

I had no complaints about the Frick Park Tavern burger. It was basic and well composed, sporting just the right sauce-to-topping ratio. My teeth sank easily into the sandwich, bun and all. 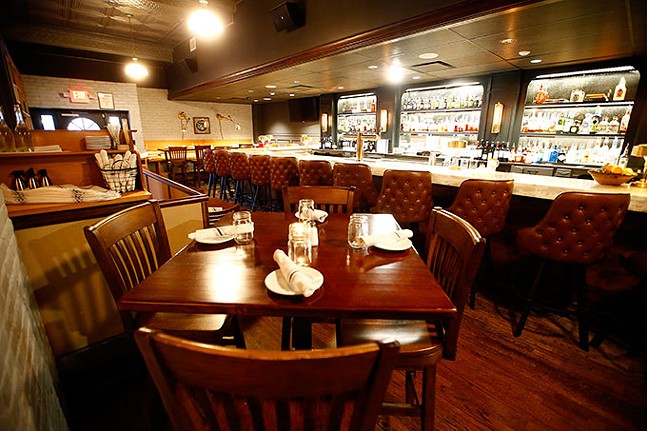 CP photo: Jared Wickerham
Inside Frick Park Tavern
An impulsive dessert order turned out to be one of the best items of the night; the tavern’s pot de créme was lush and chocolate-y, broken up nicely by the addition of a crumbly, vanilla sponge.

When Brown and Shumate began forging a path away from Ease, they wanted to revive the welcoming atmosphere at Dunning’s — Shumate compares it to the Cheers bar — while keeping the food on the same, upscale level that Ease was known for. They wanted to create a spot that the community could be proud of.

Shumate says that Regent Square used to have a love-hate relationship with Ease; Frick Park Tavern, on the other hand, has been greeted with love. The neighborhood seems to be giving them a second chance.

1. Wine & Cocktails
Shumate is responsible for the complete redesign of the cocktail menu and wine list. Frick Park Tavern now carries around 45 bottles of wine at affordable prices.

2. Popcorn
There’s no wait for food at this tavern. Sit down and you’ll immediately be greeted with a bowl of their daily popcorn flavor.

3. Old Photos
To decorate, Shumate found and framed historical photos of Frick Park. Walk around the restaurant for a peek into the neighborhood's past.