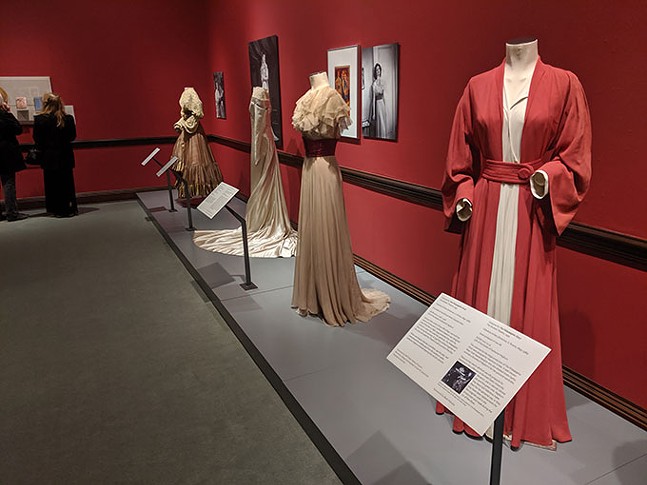 Katharine Hepburn — the late actor noted for her independent spirit, patrician features, and much-impersonated Mid-Atlantic accent — was not a typical Hollywood fashion icon. She existed between two Hollywood ideals, too tomboyish to emulate someone like Grace Kelly, who could wear a gown like nobody’s business, and too outspoken to match the seductive mystique of her contemporary Marlene Dietrich, who embraced androgyny and defied gender norms by dressing in both tailored tuxedos and women’s wear. However, one look at a black-and-white photo of a young Hepburn lounging on set in a men’s suit, complete with a bow tie and fedora, and she’s suddenly daringly sexy. After all, the photo was taken in the 1930s, a time when it was still taboo for women to even wear pants.

That photo is part of Katharine Hepburn: Dressed for Stage & Screen, the new Frick Art Museum exhibit on view through Jan. 12, 2020, celebrating the various dresses, suits, and other outfits Hepburn wore over the course of her long career.

With 37 pieces sourced from the Kent State University Museum, the exhibit offers an expansive look at the sartorial artistry encapsulating Hepburn’s career and the careers of over a dozen esteemed costume designers of film and theater. As demonstrated in informational placards throughout the exhibit, Hepburn built relationships with huge names like Walter Plunkett, who dressed her from her start in the 1930s up through her professional highs (a silk, off-the-shoulder evening gown he made for her big role in the 1949 film Adam’s Rib, in which she starred opposite Spencer Tracy, is on display here). There are also contributions from Edith Head, the legendary designer who once said, “One does not design for Miss Hepburn, one designs with her.” 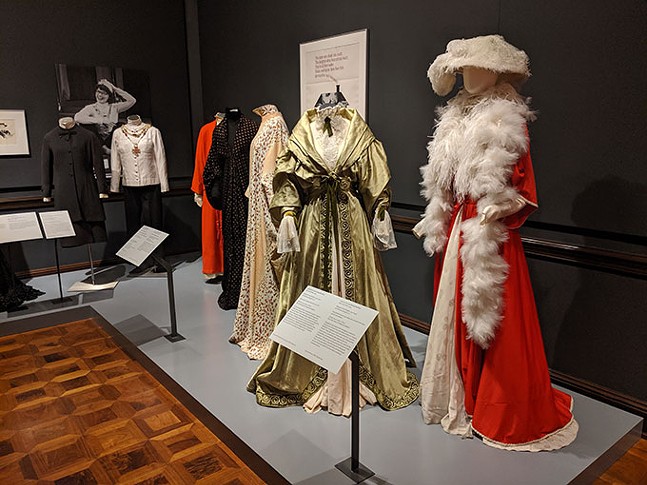 While the garments are lovely to look at — luxurious fabrics, period-specific details, and over-the-top accents definitive of Hollywood’s Golden Age — they also give credit to the more human, workaday reality beneath the big screen’s glitzy sheen. While the pieces are amazingly well preserved, the intimacy of the exhibit, with everything out in the open and close enough to touch, allows you to catch little snags or wear on costumes, some of which were repurposed and used in multiple films.

That the exhibit highlights the star’s own personal style brings the larger-than-life Hepburn down to earth in surprising ways – at one point, as I stared at the clunky leather loafers she often wore, I concluded that we were probably about the same size, and was suddenly overcome with the urge to try them on. One playful gallery centerpiece pays tribute to her preference for pants, with several pairs of her own slacks posed in various ways and a quote from Hepburn that reads, “I realized long ago skirts are hopeless, anytime a man says he prefers a woman in a skirt, I say, ‘Try one. Try a skirt.’”

The show also hints at the less glamorous details of her life and the industry through which she achieved fame and fortune. While Hepburn was hailed as a progressive woman ahead of her time, the exhibit does show how she, like many others, committed some of the most egregious sins of early Hollywood, including doing yellowface for the 1944 film adaptation of the Pearl S. Buck novel Dragon Seed. Looking at the many posters and publicity shots on display, it’s impossible to avoid thinking about her long-time, not-so-secret affair with the married Tracy, her co-star in multiple films up until his death following their last project, Guess Who’s Coming to Dinner, in 1967.

Despite the title, Katharine Hepburn: Dressed for Stage & Screen covers so much more than its star who, up until her death in 2003, made a name for herself both on and off-screen. Through the collection, the Frick Museum provides a unique portrait of a woman who continues to fascinate generations of movie lovers and a rarely seen dive into film and design history over the course of the 20th century.