Mark St. Germain is a smart, funny playwright who can spin out reams of entertaining chatter 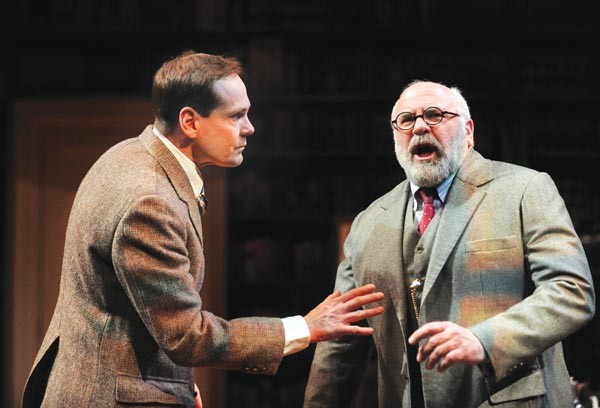 It takes a gutsy playwright to attempt theatrical magic from a meeting between Sigmund Freud and C.S. Lewis. But with Freud's Last Session — now making its local debut at the Pittsburgh Public Theater — Mark St. Germain sets out to do just that.

St. Germain is the writer of Camping With Henry and Tom, a three-character comedy/drama about Tom Edison, Henry Ford and Warren Harding. Camping's a play I like a great deal, and since historical fiction is St. Germain's "thing," I was interested to see his Freud/Lewis mash-up.

The play imagines Freud, a well-known atheist, inviting Lewis to his London home to discuss Lewis' famous conversion from atheism to Christianity.

St. Germain ups the dramatic stakes even more: The play is set at the very end of Freud's life, and Hitler has invaded Poland, and the British have just declared war on Germany.

A lesser writer might have created a dry, lifeless two-man debate. But St. Germain is a smart, funny playwright who can spin out reams of entertaining chatter.

In this regard, Jonathan Crombie gives a wonderful performance as Lewis. It's certainly the showier of the two roles, and I especially enjoyed how Crombie seamlessly slides from unalloyed spiritual fervor to wry, shaded bemusement. David Wohl's performance of Freud is surprisingly avuncular, with perhaps a bit too much of the curmudgeonly old coot. Although in his defense, much of that is built into the role.

And that's my sole complaint about Freud. Though the play is certainly enjoyable, St. Germain's reach far exceeds his grasp, and the jousting between the two on issues of faith, God and evil is surprisingly pedestrian. The arguments are nothing you wouldn't hear between stoned friends at a party — and certainly not what you'd expect from two men who, one assumes, have been heavily schooled in the Socratic Method.

In place of depth, St. Germain offers anecdote, and is facile when insight is required. It's almost as if he's afraid to alienate the audience by coming down on either side, so he willingly pulls his intellectual punches.

But, like I said, that's the only caveat. All in all, an entertaining evening.