Freshen up how you shower beer with these time-tested tips 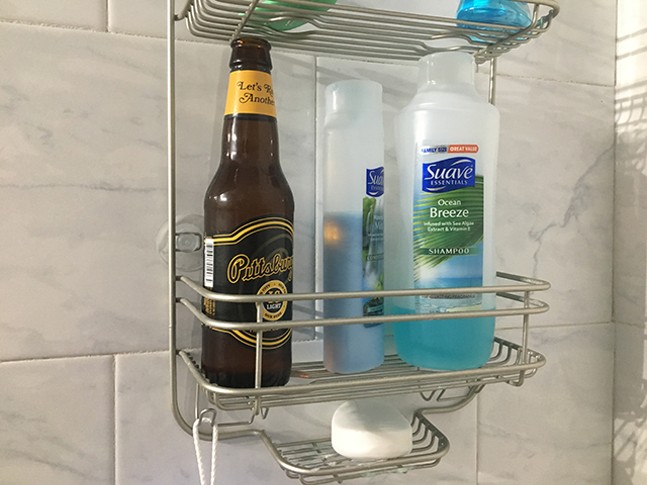 Nothing epitomizes relaxation like the image of drinking wine in a bubble bath. Or better yet, a hot tub. If, like me, you’ve never had an apartment with a usable bathtub, then a shower beer is the next best thing. You heard me! I said drink your beer in the shower.

Shower beers get a bad rap as something frat boys do to maximize pre-game time, but they have the potential for universal appeal. At the end of a long, exhausting day, the thought of a cold beer is nice. The feeling of a hot shower is also nice. Together, they make something beautiful.

But not just any beer can be consumed in the shower, so here are some tips to finding the perfect one:

1. Cans are ideal. Showers are infamously wet and therefore slippery, so a can is safer and less painful should you drop it, and it breaks/lands on your toe. (I know the photo accompanying this has a glass bottle, but that’s because they didn’t have cans.)

2. Bad beer. If you bought an expensive six-pack with a variety of IPAs and stouts, save it for another time (like after you get out of the shower). A shower beer is best when mild in flavor, because the main focus is that it’s cold (more on that later). My shower beer of choice is IC Light because it’s cheap and tastes mostly like nothing.

3. Cold beer. The best part of a shower beer is the contrast between the hot water on your head and the cold drink in your hand. Drinking a temperate beer won’t do.

4. Save it for when you really need it. Of course you don’t need to drink a beer in the shower, but it’s much more satisfying to save the beer for when you’ve had a long hard day and could use a pick-me-up. If you drink a beer every time you take a shower, it’ll lose its shine.

When you become an adult, you realize you can eat or drink whatever you want. This is bad, like when you accidentally eat a family-size bag of chips for dinner, but good when you understand how much little things, like drinking a beer in the shower, can make you happy. It doesn’t even have to be a beer. It can be a cold soda, an iced coffee, or whatever beverage you find most refreshing. You’re an adult, and you can do whatever you want.